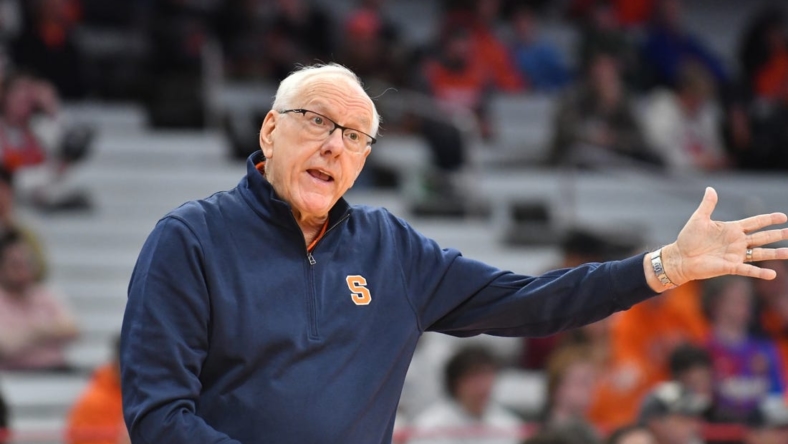 Syracuse already is searching for answers after playing just two games this season.

The Orange hope to bounce back from a lopsided loss to Colgate on Saturday when winless Northeastern visits for a nonconference battle.

Syracuse (1-1) topped Lehigh 90-72 in its season opener for coach Jim Boeheim’s 999th career win (not counting 101 victories that were previously rescinded by the NCAA).

However, the Orange were dominated by the Raiders on Tuesday as they fell flat with Boeheim seeking win No. 1,000. They allowed 19 3-pointers and made just 8 of 25 attempts from beyond the arc as part of a 38.7 percent shooting performance.

“Our offense was horrendous,” said Boeheim, whose team finished with just nine assists on 24 baskets.

Judah Mintz led Syracuse with 20 points. The freshman guard is averaging a team-high 18.0 points and has made 56.0 percent of his shots through two games.

“We’re not as good as we thought, obviously,” Mintz said. “But we’ve got high spirits. We’ll be ready to play Saturday.”

Northeastern (0-3) opened its season with a trio of defeats, the latest a 70-69 setback against Harvard on Wednesday. Jahmyl Telfort scored 23 points against the Crimson and is averaging 20.0 points and 5.7 rebounds — both team highs — on the young season.

Telfort and Coleman Stucke (10.0 points per game) have combined to make 15 3-pointers through three games. However, the Huskies only knocked down 10 3-pointers in 35 attempts as a team on Wednesday.

“Not the result we were looking for, but I’m proud of our effort from start to finish,” Northeastern coach Bill Coen said. “I thought our young guys showed some composure and grittiness, and we fought to the end.”

The Orange are 8-0 in the all-time series with all eight matchups coming at home. Their narrowest win over the Huskies came in the last meeting — a 62-56 triumph on Dec. 16, 2020, in which Joe Girard scored 21 points to pace Syracuse and Telfort had 16 to lead Northeastern.