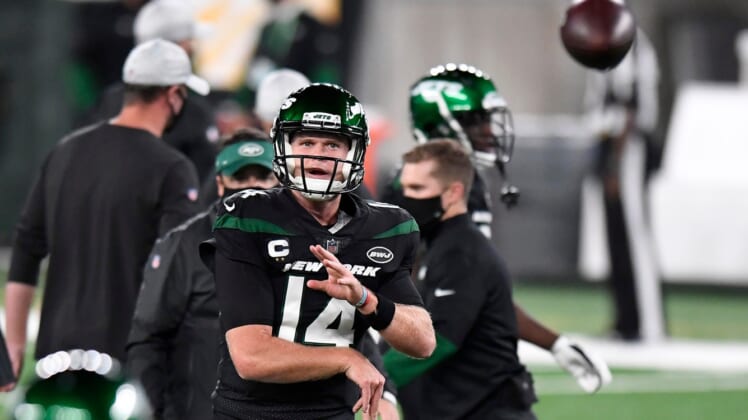 Update 9:37 PM EST, Oct. 1: Darnold returned to the game after a brief visit to the locker room.

As with pretty much everything we’ve seen surround the Jets this season, that feeling of optimism didn’t last too long. The very next possession saw Darnold go down with an injury to his throwing shoulder at MetLife Stadium in New Jersey. It was a pretty ugly-looking injury.

Darnold immediately exited the game and was replaced by veteran backup Joe Flacco. We’re not going to speculate as it relates to the severity of the injury. That would be foolish.

What we do know is that this same turf at MetLife Stadium was an issue earlier in the year when multiple San Francisco 49ers players suffered torn ACL’s during a game against the Jets, Nick Bosa included.

The injuries are different. It’s hard to compare lower-body issues to shoulder problems. With that said, it’s something that will surely come up should Darnold’s injury be long-term.

As for injured left tackle Mekhi Becton, he played in this game despite suffering a shoulder injury of his own last week against the Indianapolis Colts. Those watching the game noticed that the rookie first-round pick was laboring throughout the early part of the game. Former football players even questioned whether it was smart to play Becton in the first place.

This adds even more criticism that has been levied in the direction of embattled Jets head coach Adam Gase heading into Week 4. While he likely won’t be fired following this game, Gase is obviously on the hot seat.

Stay tuned to this page for further updates on both Darnold and Becton.