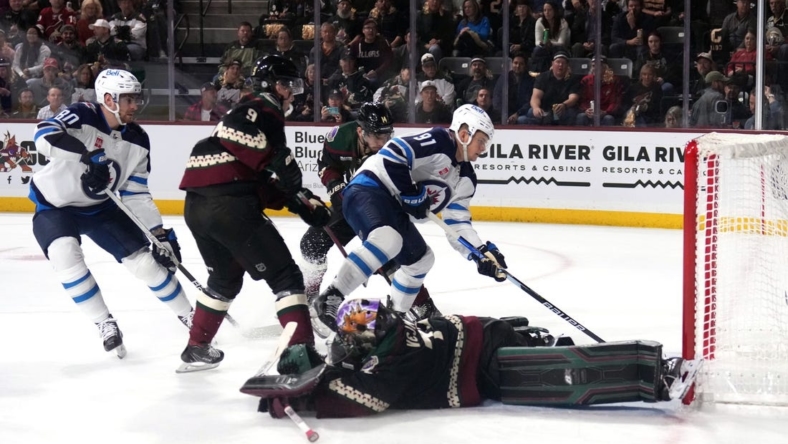 Blake Wheeler scored 32 seconds into overtime as the Winnipeg Jets spoiled the Arizona Coyotes’ debut at Mullett Arena with a 3-2 decision Friday night in Tempe, Ariz.

Cole Perfetti and Mark Scheifele also scored for the Jets, who rallied from an early two-goal deficit. Goaltender David Rittich made 19 saves in the victory.

Christian Fischer scored both goals for the Coyotes, and goalie Karel Vejmelka kept them in the game with 32 saves at Arizona State University’s new 5,000-seat venue.

The winner came after Coyotes defenseman Shayne Gostisbehere turned the puck over at the offensive blue line, giving Winnipeg’s Pierre-Luc Dubois a breakaway down the left wing. Dubois got to the faceoff circle before sending a pass across the slot to Wheeler for a one-timer as Vejmelka tried to scramble across the crease.

After a scoreless second period, Scheifele tied the game at 8:34 of the third. Josh Morrissey’s shot from the right point hit Wheeler in front of the net, but Scheifele was able to find the puck and beat Vejmelka with a wrister from just inside the right faceoff dot.

Fischer opened the scoring at 10:17 of the first period as Troy Stecher’s shot from the right point went wide left of the net and caromed off Fischer’s right hip and into the net.

That came less than a minute after Vejmelka stopped Winnipeg’s Axel Jonsson-Fjallby on a two-on-zero breakaway.

Fischer made it 2-0 at 15:28 on a wrist shot from the top of the left faceoff circle just after Jack McBain won a draw.

However, Perfetti got the Jets on the board just 26 seconds later, stealing the puck along the right-wing boards and skating hard to the crease before deking Vejmelka and slipping a forehander into the open net.