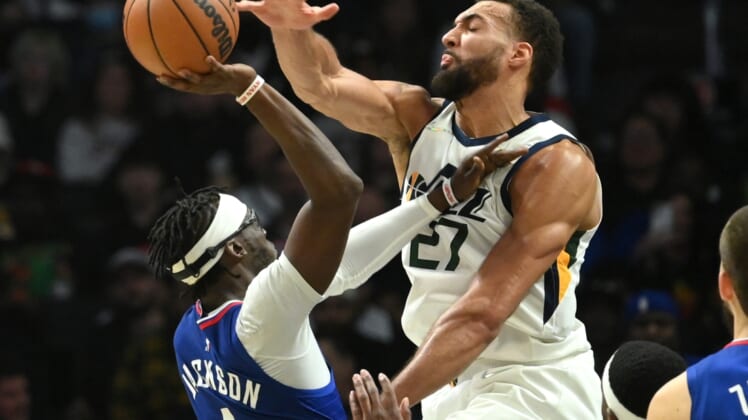 After losing their fifth straight game in demoralizing fashion, the Jazz are in need of their own big morale boost.

Perhaps Utah’s crowd will provide that Thursday night when the Jazz (45-31) return to Salt Lake City to host the Los Angeles Lakers (31-44) for their first home game in a couple of weeks after a brutal coast-to-coast 1-5 road trip.

The Lakers, who have lost three straight and seven of nine, are also in need of a big pick-me-up as the regular season winds down.

L.A. continues to play without LeBron James and Anthony Davis, who have been together on the court just 21 times all season. The Lakers, fresh off a 128-110 drubbing in Dallas on Tuesday, are now battling the San Antonio Spurs for the final play-in spot in the Western Conference.

It’s uncertain when the superstar Lakers will play again. James is listed as out against the Jazz, while Davis is doubtful. The Lakers are back home Friday night against New Orleans, another team in the mix for one of the four play-in spots.

“With those guys out, we’re at a talent deficit, so the focus and execution has to make up for it,” Lakers coach Frank Vogel said. “This is just the latest dose of adversity that this year’s team has faced. When you lose ‘Bron, OK, you have to adjust yet again throughout a season of setbacks.”

Though they’ll be shorthanded, the Lakers are looking to sweep the season-series against Utah for just the second time in 37 years. Los Angeles won at home 101-95 on Jan. 17 and 106-101 on Feb. 16. This will be the only game at Vivint Arena this season.

The Jazz, no doubt, were happy to get out of the City of Angels after Tuesday night’s debacle, which was eerily reminiscent to Game 6 of the second round last summer when they were eliminated by the Clippers. Utah held and blew 25-point leads in both contests.

In Utah’s defense, the Jazz are missing three key players. Starting sharpshooter Bojan Bogdanovic and reserves Hassan Whiteside and Danuel House Jr. are injured. Guard Trent Forrest left the game against the Clippers early with a concussion, too.

Snyder did lament the eight fourth-quarter turnovers and 14 second-chance points, which he noted added up to nearly a 40-point swing.

“Those,” he said, “are possessions we don’t get a chance to score.”