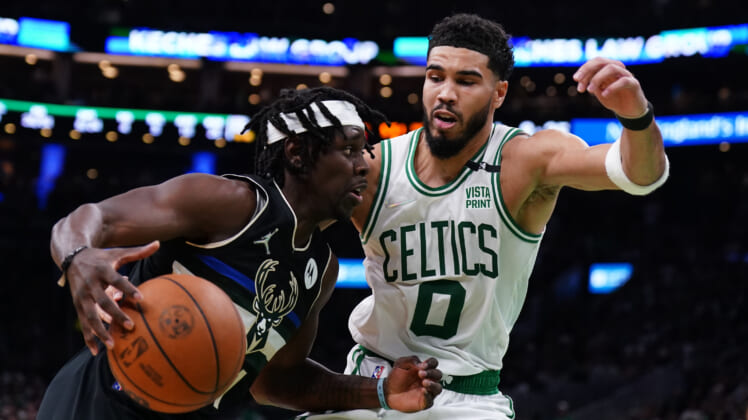 Facing elimination in a hostile environment playing at the Fiserv Forum against the Milwaukee Bucks, Jayson Tatum chipped in the performance of his life to help the Boston Celtics stay alive for Game 7 back at home at the TD Garden on Sunday afternoon.

For those tuning in on Friday night for Game 6, they got to see two NBA superstars at their very best on one of the biggest stages of their lives. It was a spectacular show.

While they got solid contributions from Pat Connaughton and Jrue Holiday, as usual, it was all about Giannis Antetokounmpo for the Bucks.

Leading the way with a monster stat line with 44 points, 20 rebounds and six assists, the Greek Freak also sank two-of-three shots from distance.

Yet, even an eye-popping performance from Antetokounmpo wasn’t enough to best what Jayson Tatum and his teammates brought to the party.

In perhaps the best performance of the 24-year-old Tatum’s career, he racked up 46 points, nine rebounds, four assists while hitting shooting 46.6% from three, making seven treys. Tatum took over the game down the stretch, scoring 11-straight for the Celtics to help propel them to victory.

The Celtics also benefited from Jaylen Brown chipping in 22 points with Marcus Smart adding 21 of his own. In all, the Tatum/Brown/Smart trio sank 16 three-point shots to help keep the game out of reach.

Tatum, who helped the Celtics reach the Eastern Conference Finals in 2019-20 with the Celtics, isn’t ready to give up on his season just yet. His latest performance proved that more than anything.

Game 7 between Giannis and Tatum should be a true spectacle for the basketball community.