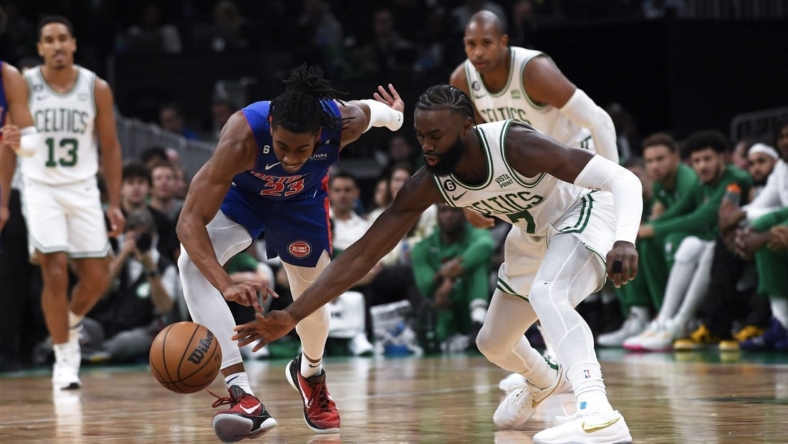 Jayson Tatum scored 16 of his game-high 31 points in the third quarter as the host Boston Celtics surged past the Detroit Pistons 128-112 on Wednesday night.

After scoring just five first-half points, Tatum brought his point total up to 21 while shooting 6-for-8 from the field and 4-for-5 from downtown in the third.

Star guard Cade Cunningham was held without a field goal (0-for-8) in the opening half and went on to finish with only four points.

Three of Tatum’s third-quarter triples came within the first 2:30 before another with 6:56 left extended the Boston lead to 16, forcing a Detroit timeout.

The Pistons later used a 7-0 run to move back within 10, then a quick answer came with Hauser’s two corner treys. Brown capped the quarter by hitting one of his own in the final second.

In the fourth, a pair of Smart assists sent the Boston crowd to its feet. Smart dove for a loose ball and fed Tatum for a running dunk with 7:04 left.

Smart also set up Brown’s reverse dunk less than two minutes later that lifted Boston to its largest lead at 24.

Two of Hauser’s triples came in the last frame.

After Detroit scored the game’s first two points, the Celtics went on a 10-0 run that Tatum and Grant Williams capped with 3-pointers. Boston led by as many as 12 in the first as Malcolm Brogdon’s drive punctuated a 6-0 spurt with 4:47 left.

The Pistons got off to a 7-for-30 shooting start, but they made it a one-possession game three times in the second. Bey’s driving layup with 5:12 left trimmed Detroit’s deficit to 42-39.

Brown scored six straight in the final two minutes of the half, moving Boston’s lead to 14. That was the margin at the break after Smart’s layup with 4.8 seconds remaining.

Brogdon did not play in the second half due to right hamstring tightness.