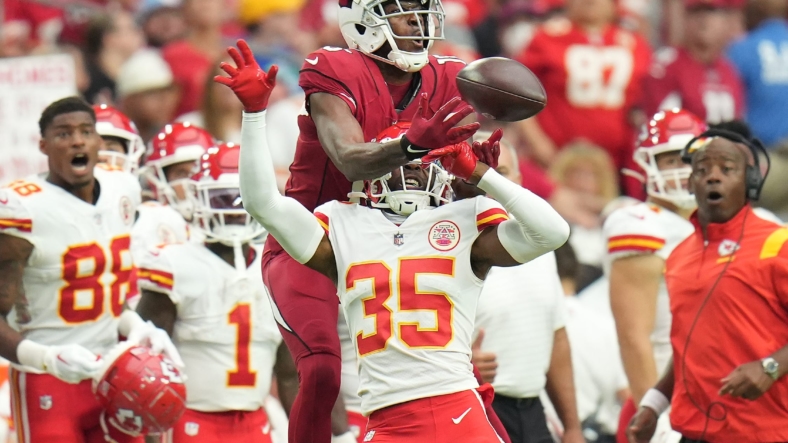 A seventh-round pick out of Washington State, Jaylen Watson was thrown into a starting role for the Kansas City Chiefs Thursday night against Justin Herbert and the Los Angeles Chargers.

The cornerback was being thrown to the wolves due to the injury to fellow rookie Trent McDuffie. He was also one of the players we had our eyes on heading into this “Thursday Night Football” outing.

Watson did not disappoint in his first NFL starting action, putting up a game-changing play early in the fourth quarter with the game tied at 17. Los Angeles was facing a first-and-goal at the Chiefs’ three-yard line. That’s when Herbert targeted tight end Gerald Everett right at the goal line. It’s also when Watson jumped the route for the interception.

Yeah. That actually happened. Jaylen Watson took the interception at the one-yard line and returned it 99 yards for the touchdown. Instead of Kansas City being down either three points or seven, the team found itself up a touchdoown. We’re talking about a two-score game-changing play from the rookie seventh-round pick.

Watson, 23, actually saw extensive action in his regular-season debut against the Arizona Cardinals last week. He played 33 snaps on defense, recording one pass defended while yielding one catch on two targets. Kansas City’s brass loves what it has in the youngster.

“Yeah, I thought he did a nice job. (The draft) pick doesn’t matter now, right? It’s a matter of how he continues to up his game with the things that he’s seeing there. That’s the important part and focusing in on the gameplan and being able to execute that absolutely (the) best he can.”

Kansas City is ultra thin at cornerback after losing Charvarius Ward to the San Francisco 49ers in free agency. It is now relying on two rookie cornerbacks to do their thing.

Once McDuffie returns from injury here soon, the Chiefs will have two nice young book ends at cornerback. That’s a testament to the job general manager Brett Veach has done in the draft recently.