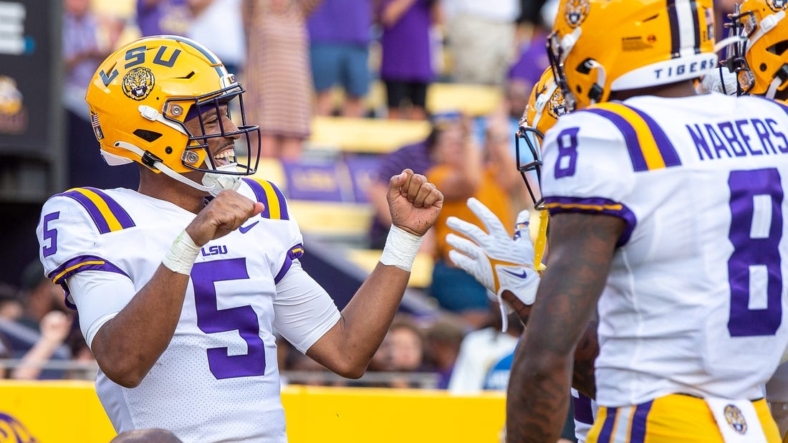 The Tigers (1-1) bounced back from a one-point loss to Florida State six days earlier as Daniels led them to touchdowns on each of his five possessions.

Southern (1-1), playing for the first time against its cross-town rival, saw the tables turned on it a week after it scored the second-most points in school history when it routed visiting NAIA opponent Florida Memorial 86-0 in Eric Dooley’s first game as head coach.

LSU outgained the Jaguars 550-262 and took the ball away five times.

Armoni Goodwin’s 2-yard touchdown run pushed LSU’s lead to 58-0 in the third quarter before Benny McCray’s 94-yard interception return for a touchdown produced the Jaguars’ first points with 3:45 left in the period.

Goodwin scored again on a 1-yard run to increase the lead to 65-7 early in the fourth quarter.

Karl Ligon ran 1 yard for a touchdown midway through the period and Luke Jackson added a 29-yard field goal as time expired.

Daniels, who rushed for 114 yards in the season opener, completed the first possession of the game with an 18-yard touchdown run.

Micah Baskerville intercepted a pass from Besean McCray, who completed 9 of 16 for 61 yards, and returned it 29 yards for a touchdown and a 28-0 lead.

After a Jaguars fumble, Daniels threw a 5-yard touchdown pass to Malik Nabers before Baskerville blocked a punt, resulting in a safety that extended the lead to 37-0 at the end of the first quarter.

On the second play of the second quarter Daniels threw a 44-yard touchdown pass to Brian Thomas Jr. for a 44-0 lead. Then Daniels was replaced by Garrett Nussmeier after completing 10 of 11 passes for 137 yards.