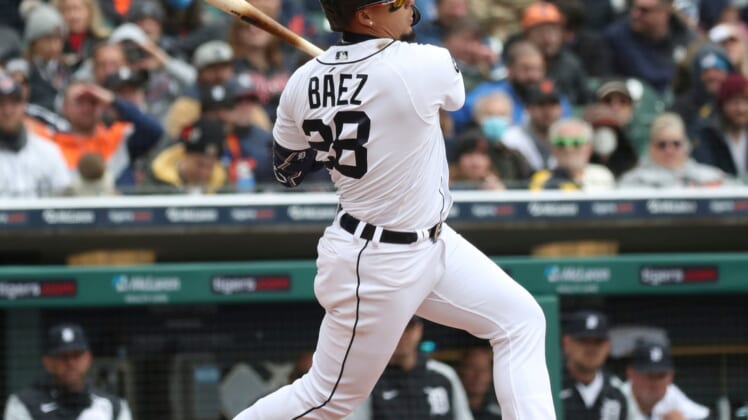 Javy Baez hit a game-winning single to cap a two-run, ninth-inning rally and the Detroit Tigers edged the visiting Chicago White Sox 5-4 in the opener for both teams on Friday.

Eric Haase homered off Liam Hendriks with one out to tie the game. After Austin Meadows hit a two-out triple, Baez hit a blast toward the right-field wall. White Sox outfielder A.J. Pollock bobbled the catch out of his glove and off the wall before securing the ball, making it a base hit by rule.

Baez was making his Tigers debut after signing a six-year contract as a free agent. Miguel Cabrera had a two-run single, while Meadows and Robbie Grossman scored two runs apiece for Detroit.

Gregory Soto gave up a home run to Andrew Vaughn in the top of the ninth but was credited with the win.

Pollock had three hits, a run scored and an RBI for Chicago.

Rodriguez got into trouble with two out in the first. He issued walks to Jose Abreu and Yasmani Grandal before Eloy Jimenez smacked a run-scoring single to center.

The White Sox scored two two-out runs in the second. Pollock had an RBI single and Luis Robert then doubled to left to bring him in.

Chicago had runners in scoring position with one out against Tigers reliever Drew Hutchison in the fifth. Hutchison escaped the jam as Grandal popped out and Jimenez grounded out.

Detroit scored a run in the sixth but was disappointed not to get more. Grossman was hit by a pitch and Meadows walked. After a fly out, Jeimer Candelario ripped a single to center to score Grossman. Cabrera then hit a bouncer and Candelario was forced out at second.

The relay pulled the first baseman off the bag but Candelario was called for interference and Cabrera was also ruled out.

Detroit loaded the bases with one out against Aaron Bummer in the eighth on singles by Grossman and Baez, sandwiching a walk to Meadows. After Candelario struck out, Hendriks entered the game. Cabrera promptly tied the game with a two-run single. Akil Baddoo then grounded out with the bases loaded.