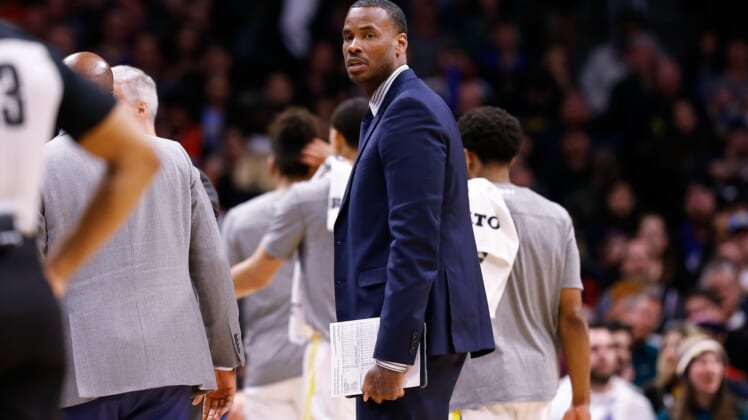 Assistant coach Jarron Collins has left the Golden State Warriors to pursue a position as a head coach or associate head coach.

Collins, 42, a member of the Warriors’ staff since 2014, told ESPN’s The Undefeated on Monday that he’s ready for a bigger challenge.

“This is about myself and my own personal growth,” he said. “I had a conversation with (head coach) Steve (Kerr) and the Warriors. I’ve been there seven years and coached Hall of Fame players. We’ve won championships. I learned so much. For me, this is about taking the next journey and next step in my career.

“Obviously, Steve Kerr is the head coach and Mike Brown is the lead assistant. It’s time for me to step out and see whatever opportunities are out there for me.”

Collins, who played 10 seasons in the NBA with four teams, joined Golden State as a player development coach before the team’s 2014-15 championship season. He was promoted to assistant coach in 2015-16 and has been the Warriors’ defensive coordinator for the past two campaigns.

He said he has drawn interest from NBA teams, but he is also open to being a head coach at the college level.

Kerr said Collins is ready to run his own team.

“I’m going to really miss Jarron, both personally and professionally,” Kerr told The Undefeated in a statement. “He’s an excellent coach and a wonderful human being. It’s going to be different without him around, but he deserves the chance to continue his growth with the goal of ultimately becoming a head coach in the NBA. Jarron has all the skills necessary. He’s a great teacher and communicator, he’s smart and funny, and he knows the game.”

Collins was a second-round pick by Utah out of Stanford in 2001. The 6-foot-11 center averaged 3.9 points and 2.9 rebounds in 542 games (216 starts) with the Jazz, Phoenix Suns, Los Angeles Clippers and Portland Trail Blazers.