Jared Walsh hits for cycle as Angels down Mets 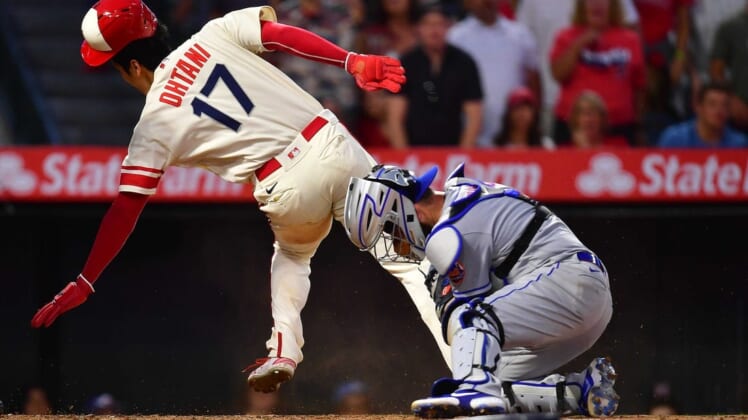 Jared Walsh became the eighth player in Los Angeles Angels history to hit for the cycle in an 11-6 win over the New York Mets Saturday night in Anaheim, Calif.

Walsh struck out in his first at-bat of the game, but singled in the third, doubled in the fifth and homered in the seventh before coming to the plate with two on and two out in the eighth against Mets reliever Trevor Williams.

On a 1-1 pitch, Walsh hit a sinking liner to center field where center fielder Khalil Lee, a late-inning replacement for Brandon Nimmo, made a diving attempt but came up empty.

Trout, who missed the previous three games with a sore groin, returned with a bang, hitting two home runs and a double, scoring three times and driving in three. The Angels also got homers from Ohtani and Andrew Velazquez.

On the mound, Angels right-hander Michael Lorenzen (6-2) took a shutout into the seventh inning before coming out of the game with two on and one out. Reliever Aaron Loup yielded an RBI single, the run charged to Lorenzen, who gave up one run and six hits in 6 1/3 innings.

The Angels took an early lead against Mets starter Carlos Carrasco. Ohtani and Anthony Rendon each hit an RBI double in the first inning for a 2-0 lead.

Trout hit his first homer of the night in the third to make it 3-0, then doubled in the fifth and scored on Ohtani’s homer for a 5-0 Angels lead.

The Angels’ offensive onslaught continued against the Mets bullpen. In the sixth inning, Velazquez hit a solo homer and Trout a two-run homer for an 8-0 lead.

The Mets scored on an RBI single by Mark Canha in the seventh and a solo homer by Pete Alonso in the eighth before scoring four times in the ninth, including a three-run homer by Lee.