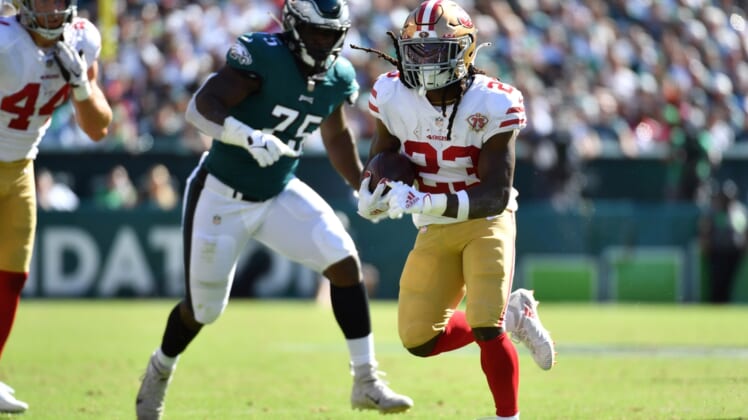 San Francisco 49ers running back JaMycal Hasty will be sidelined multiple weeks after sustaining a high ankle sprain during Sunday’s 17-11 road win over the Philadelphia Eagles.

The loss of Hasty comes one week after starter Raheem Mostert was lost to a season-ending knee injury.

Hasty also wasn’t the only San Francisco running back hurt against the Eagles as rookies Elijah Mitchell (shoulder) and Trey Sermon (concussion) also were banged up.

Both of those running backs have a chance to play this Sunday against the Green Bay Packers. Sermon would have to clear concussion protocol.

“JaMycal is the only one that’s for sure out,” 49ers coach Kyle Shanahan said Monday during a conference call. “Elijah and Trey have a chance, so we’ll see how this week goes.”

Mitchell rushed for 42 yards on 17 carries and had two receptions for 11 yards before exiting.

Hasty gained 38 yards on five rushes and made four catches for 21 yards. Sermon gained 8 yards on his lone carry.

Trenton Cannon, claimed on waivers last week, rushed once for a loss of a yard. He is the lone healthy running back currently on the 53-man roster.

Shanahan said the 49ers will work out veteran running back T.J. Yeldon. According to reports, the club also plans to have Lamar Miller and Duke Johnson in for workouts.

San Francisco also has Kerryon Johnson on the practice squad. Johnson rushed for 1,225 yards in 34 games (16 starts) with the Detroit Lions over the past three seasons.