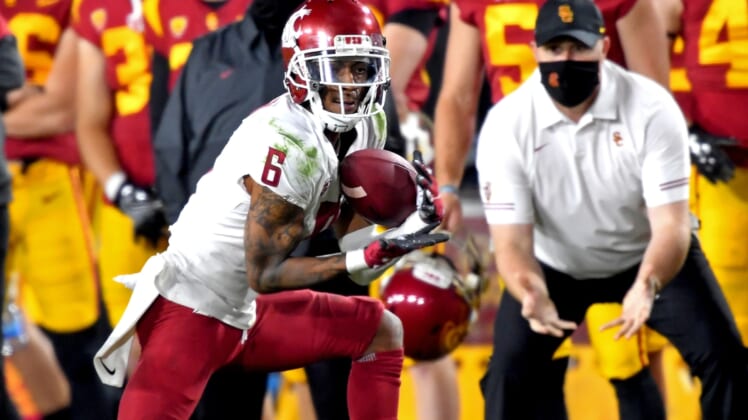 Dec 6, 2020; Los Angeles, California, USA; Washington State Cougars wide receiver Jamire Calvin (6) catches a pass for a first down in the second half of the game against the USC Trojans at United Airlines Field at the Los Angeles Memorial Coliseum. Mandatory Credit: Jayne Kamin-Oncea-USA TODAY Sports

He announced his decision on social media late Saturday.

Sorry For The Wait. ??? pic.twitter.com/BAqBddFzEx

Calvin, from Pasadena, Calif., was a four-star recruit in the Class of 2017. He took a medical redshirt in 2019 and has two years of eligibility remaining.

In three seasons with the Cougars, he appeared in 30 games and made 92 catches for 980 yards and five touchdowns.

The Bulldogs are scheduled to open the 2021 season on Sept. 4 against Louisiana Tech in Starkville, Miss.

Mississippi State finished 4-7 (3-7 Southeastern Conference) in 2020, which was Leach’s first season with the Bulldogs.