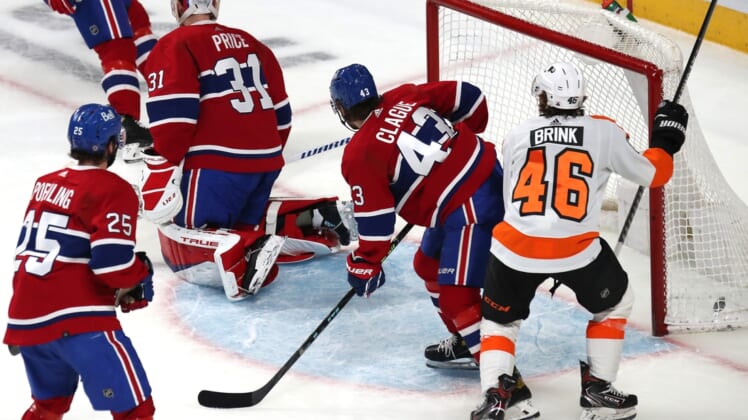 James van Riemsdyk had two goals and one assist while Ivan Provorov had one goal and one assist to lift the Philadelphia Flyers past the host Montreal Canadiens 6-3 on Thursday in a matchup of the two worst teams in the Eastern Conference.

Oskar Lindblom, Travis Konecny and Morgan Frost added one goal apiece for the Flyers, who snapped a six-game losing streak.

Bobby Brink contributed two assists for Philadelphia (24-43-11, 59 points), and Martin Jones made 31 saves for the win.

Mike Hoffman, Jake Evans and Cole Caufield scored one goal each for the Canadiens (20-47-11, 51 points), who dropped their seventh in a row.

The Flyers went ahead 1-0 when van Riemsdyk connected at 7:43 of the first period. The goal was the result of a turnover by Price behind the net.

Provorov extended the advantage to 2-0 at 14:29 of the first off a van Riemsdyk assist.

The Canadiens closed within 2-1 when Hoffman scored at 15:31 of the first. Hoffman stayed aggressive with a bouncing puck in front and pushed it under Jones’ pads.

Montreal equalized at 2 when Evans scored at 5:28 of the second.

The Flyers responded quickly when Lindblom fired a wrist shot on the short side and past Price for a 3-2 lead at 6:49.

Konecny eventually broke free, received a crisp pass from Ronnie Attard and scored for a 4-2 advantage at 13:02 of the second.

The Canadiens came out strong on offense to open the third and had several strong scoring chances in the first six minutes. Evans had a stellar slap shot saved by Jones at 5:12.

Montreal’s Tyler Pitlick nearly scored short-handed at 13:11, but his shot clanged off the crossbar. It was one of several solid chances throughout the game for the Canadiens while playing short-handed.