Jameis Winston and the Raiders Would be a Nightmare 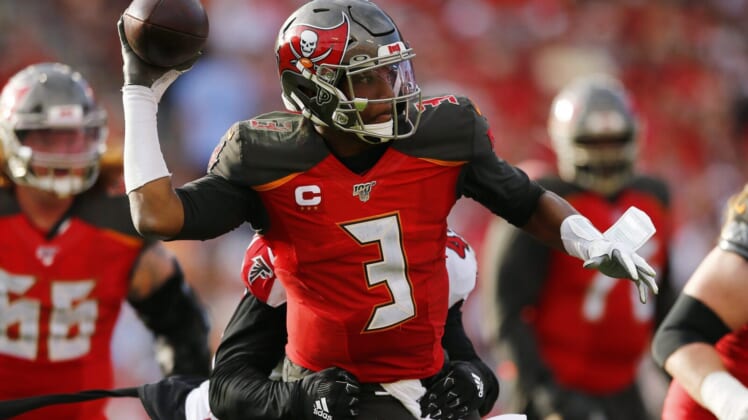 Respected columnist Peter King mentioned in his weekly column he wouldn’t be surprised if Jon Gruden and the Las Vegas Raiders kick the tires on the talented but turnover happy quarterback, should he be available. That could be one of the worst ideas ever.

No one exactly knows how Las Vegas Raiders über head coach Jon Gruden thinks. Based on past history, relationships with the media, and his bigger-than-life persona, all we can do is infer and guess.

In his wildly popular Football Morning in America column on Pro Football Talk‘s website, Peter King gave what he called his 10 best-educated guesses concerning the quarterback carousel during this offseason in the NFL. Names like Tom Brady, Drew Brees, Philip Rivers, Cam Newton, Teddy Bridgewater, Andy Daulton, and Jameis Winston were all explored.

And while Mr. King will forget more than I’ll ever know about the NFL (BTW…I am an avid reader going back to his Sports Illustrated days), his brief mention about Winston possibly being a fit for the Raiders gave me the heebie-geebies.

Winston would absolutely drive Gruden crazy. With a young offense on the verge of being a very special unit, inserting an unknown with the checkered past of Winston is a recipe for disaster – which is why I don’t think it happens.

I get it – conventional thinking is Gruden can’t get enough of talented signal-callers. He will often overlook their downsides due to the upside and potential the coach sees in a specific player. The “book” on Gruden, probably perpetuated due to his popular ESPN Quarterback Camp television show, is he becomes unable to resist the power of talent at the position. This is why King, albeit in passing, mentions Jameis Winston as a possibility for Las Vegas in 2020.

Yet, looking at Gruden the coach and Jameis Winston the player, mental images of oil and water, holes in the wall at the newly minted Allegiant Stadium, and a whole lot of NFL Films bleeps of the coach on the sideline dominate.

While Winston is, and always had, God-given talent to play the game of football at the highest level, he’s also been an enigma. In 2019, Winston threw for 5,109 yards, 33 touchdowns, averaged 8.2 yards per pass play, and – wait for it – accounted for 30 interceptions.

This is where the needle scratch across the vinyl record (most of you have never owned) drops in.

If we know anything about Gruden, he values quarterbacks with talent, yes, but not those who create turnovers or make a ton of mental mistakes. Winston does just that. The Tampa Bay Buccaneers know this and it appears the brass in Florida are getting prepared to let Jameis Winston walk. With Bruce Arians at the helm, a coach who does wonders with quarterbacks once they lock-in on his system, that says a lot.

Although no decision has been made in Tampa, and Winston still has his fifth-year option available on his rookie contract, it’s appearing more and more likely Winston will hit the open market.

Winston will command big money on the open market and will find suitors galore. There is no doubt his time in the NFL has not yet expired. With the arm, the ability, and flashes of brilliance, there will be a big fish ready to bite. As Grant Gordon of NFL.com once said: Winston is the ultimate “one-man roller coaster.” The Raiders don’t need a thrill ride, they need a steady hand who can win.

I just don’t think Gruden and the Raiders will opt for the E-Ticket.

King also mentioned the on-going Tom Brady to the Raiders conversation, which isn’t dying down anytime soon. While Brady is in the last throws of his Hall of Fame career, he would be a better fit in the short-term that Winston if Las Vegas decides to move on from Derek Carr – which I believe they will not.

Winston would absolutely drive Gruden crazy. With a young offense on the verge of being a very special unit, inserting an unknown with the checkered past of Winston is a recipe for disaster – which is why I don’t think it happens.

Is it worth discussing the possibility? Absolutely, just as I’ve said all along the Brady rumors are worthy of time as well. But with Winston, I just can’t see that marriage ever happening.