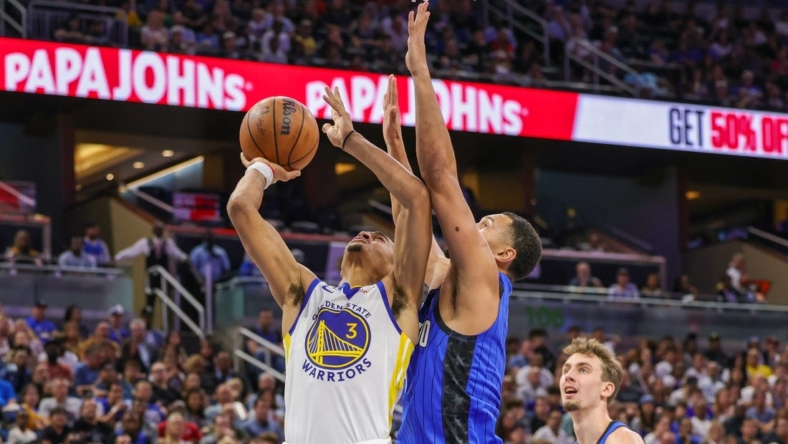 Jalen Suggs bombed in a tiebreaking 3-pointer, then turned a steal into an eventual difference-making free throw Thursday night as the host Orlando Magic continued the Golden State Warriors’ miserable road trip with a 130-129 triumph.

Seeking their first win in four tries on a five-game trip, the Warriors led by as many as 16. Yet Golden State still had to rally from a late seven-point deficit to draw even at 126-all on Curry’s eighth 3-pointer of the game with 59.3 seconds left.

The Magic tried unsuccessfully to get the ball to Franz Wagner on their ensuing possession, leaving Suggs no choice but to hoist a shot-clock-beating triple from well beyond the arc. It rattled in, giving Orlando a three-point lead with 37.7 seconds left.

Curry rushed the ball up the court, but threw it right to Suggs, who was fouled with 31.5 seconds to go. The former Gonzaga star missed his first attempt, but made the second to extend the lead to four.

The Warriors still managed to get a shot at a win after Klay Thompson’s 3-pointer and Paolo Banchero’s turnover with 4.9 seconds to play. But the Magic shut off Curry on Golden State’s last possession, forcing a pass to Thompson, who misfired badly on a buzzer-beating 18-footer.

Suggs led a balanced attack with 26 points for the Magic, who were playing just their third home game of the season. Winless on the road, they are now 2-1 at home.

Okeke and Carter each hauled in a game-high nine rebounds.

Suggs, who also found time for a game-high-tying nine assists, and Banchero combined for 12 free throw points, helping the hosts run up a 33-10 advantage at the foul line. Orlando took 46 foul shots to Golden State’s 15.

Curry finished with a game-high 39 points and Thompson had 27 for the Warriors, who had lost to Charlotte, Detroit and Miami in the previous five days. They complete their week-long trip Friday at New Orleans.

Curry, who matched Suggs’ assist total with nine, shot 8 for 15 on 3-pointers and Thompson made 7 of 15, propelling Golden State to a 57-39 advantage in points from beyond the arc.

Kevon Looney added 17 points to go with a team-high seven rebounds, Andrew Wiggins had 15 points and Jordan Poole 11 for the Warriors, who fell to 0-5 on the road for the season.