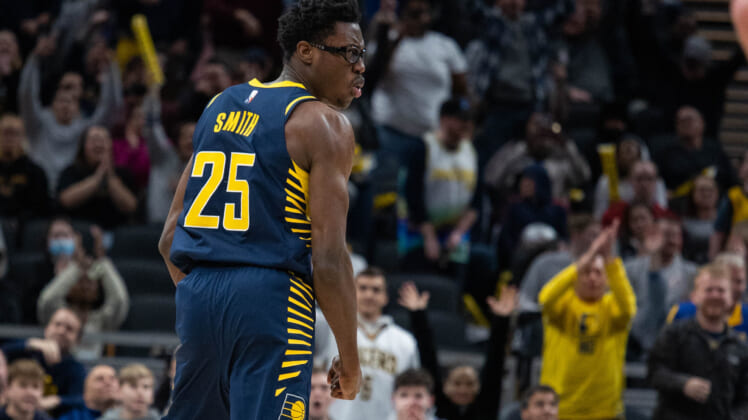 In the latest move signifying the strong offseason the Indiana Pacers have had so far, general manager Kevin Pritchard managed to re-sign Jalen Smith. It continues what’s been a string of brilliant decisions for the front office. For those who have missed it, or are unaware, here’s a quick recap.

With the sixth pick in the 2022 NBA draft, the Pacers drafted Bennedict Mathurin out of Arizona. He’s expected to be Tyrese Haliburton’s right-hand man on the wing and possibly the franchise’s newest star player. Next up they were able to trade oft-injured Malcolm Brogdon to Boston for a 2023 first-round draft pick, an intriguing player, and former first-round pick Aaron Nesmith, along with four other players.

If these were all the moves the Pacers made most fans would be good. And in fact, some NBA experts would say the Pacers did a good job too. But that’s not all.

Retaining Jalen Smith is an underrated move for Pacers

The Pacers were also able to re-sign, former first-round selection (10th overall), Jalen “Stix” Smith to a three-year $15.1 million deal. There is a player option for the 2024-2025 season and a 10 percent trade kicker, according to Hoopshype.

So, yeah the Indiana Pacers are having a great offseason. Now, if they are able to somehow acquire Deandre Ayton then this offseason would catapult into the best one in franchise history.

However, let’s get back to Smith with Indiana. This is a kid that I said coming out his biggest weaknesses were “strength and weight, which NBA strength and conditioning coaches can easily correct.”

For those that are unaware, Smith comes equipped with a 7-foot-2 wingspan and improved so much from his freshman to sophomore year in college that his head coach told him not to come back! This kid is special and if you didn’t see him last year search the internet for his highlights with the Pacers.

Something that is incredibly salivating is the idea that Indiana will be able to always have an athletic, shot-blocking, and three-point shooting big man on the floor at all times. The aforementioned Smith, also Myles Turner, Isaiah Jackson, and Goga Bitadze.

A front-court pairing of Smith and Turner will be much more athletic and should be more dynamic than the Domantas Sabonis and Turner pair. Turner and Smith can more easily switch on any screen and there will always be a threat of a weakside shot blocker for the opponent to worry about. If that doesn’t get you excited or inspire confidence, then how about some advanced analytics.

Smith’s per-36 stats are better than anything he showed while he was in Phoenix. By the way, thank you again Phoenix for “giving up” and trading him to the Pacers. This will be another trade they regret making.

Ok, so if that per-36 didn’t convince you how about his per 100 possessions.

So, are you excited now? Yeah, I thought so.

Stix with Turner or Goga or Jackson or Oshae Brissett will be a lot of fun to watch. Now, we do need to note that those four guys will be competing very hard to earn as many minutes as possible. So, while Carlisle said Smith is the team’s starting power forward it doesn’t mean that Jackson or Brissett can’t outplay Smith and move him to the bench.

Also, as previously mentioned, we need to note that it is being heavily rumored that the Pacers might acquire Deandre Ayton. If Ayton is acquired he will most likely be the team’s starting center and Turner will be traded. Regardless though, Smith has earned the right to get the first crack at being the Pacers starting power forward of the future. He just needs to do what he did to close out last year and everyone will be ecstatic.

Related: Evaluating how Aaron Nesmith fits the Indiana Pacers, potential role in 2022 and beyond