Myles Turner trade likely this summer, could be used in Deandre Ayton sign-and-trade 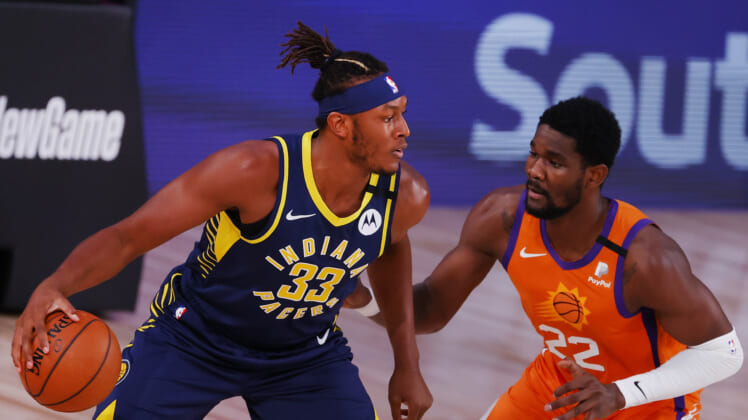 Indiana Pacers center Myles Turner has floated in NBA trade rumors for more than a year. As the Pacers look to turn the page in their franchise history before the 2022-’23 season, it appears Turner might finally be moved.

Indiana committed to a transition before the 2022 NBA trade deadline, moving several key veterans for draft picks and long-term assets. After receiving strong interest league-wide in both Turner and Domantas Sabonis, the Pacers dealt Sabonis to the Sacramento Kings for Tyrese Haliburton.

Months later, Turner is once again being floated as a trade candidate. Due to test the open market next summer, Indiana is already shopping its veteran center and a deal could happen within a matter of months.

ESPN’s Brian Windhorst shared on The Hoop Collective podcast that Turner is likely going to be traded before the 2022-’23 NBA season begins. In fact, he could be involved in a sign-and-trade with the Phoenix Suns for Deandre Ayton.

Even if Turner isn’t moved in a sign-and-trade for Ayton, that might still be an indication of the Pacers’ plans. Indiana is the lone team with a long-term need at center and the cap room to offer a max contract to Ayton.

The Pacers would get younger at the position and secure a big man with significantly more upside. There’s also reason to believe Ayton could benefit from sharing the court with Haliburton and receiving a larger role than he did in Phoenix.

Of course, pursuing that would also require patience from Indiana. The Suns are prioritizing a pursuit of a Kevin Durant trade and it’s believed Ayton would need to be involved in that, whether he heads to the Brooklyn Nets or joins the Utah Jazz in an expanded deal.

Either way, it appears likely that Turner’s days in Indiana are numbered. While any team acquiring him would only have the 26-year-old under contract for the upcoming 2022-’23 season, his defense and ability to shoot from the perimeter make him a compelling target for multiple teams.