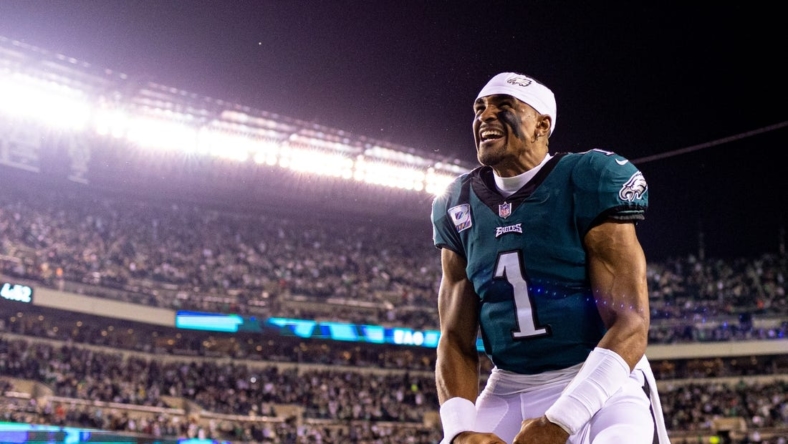 Quarterback Jalen Hurts has just as many rushing touchdowns as passing touchdowns this season for the unbeaten Philadelphia Eagles.

He has scored six of each through six games, passing for 1,514 yards and rushing for 293 more heading into Sunday’s game between the Eagles (6-0) and visiting Pittsburgh Steelers (2-5).

“His mobility is definitely a factor,” Steelers linebacker Alex Highsmith said. “We have to keep him in the pocket. When you play guys like him, Lamar (Jackson), Josh Allen, guys who can move like that, it’s an extra added challenge.

“You can’t just rush wild and be rushing all over the place because he’ll find escape lanes. … You really have to be able to rush disciplined and compress the pocket when you are playing guys like him who are able to move.”

Hurts, whose legs are rested after a Week 7 bye, has been sacked 15 times this season. The Dallas Cowboys sacked him four times and contained him to 27 rushing yards, but Hurts tossed two touchdown passes and guided the Eagles to a 26-17 win in Week 6.

Hurts ran for a season-high 90 yards in the season opener at Detroit, one of three games this season with at least 15 rushing attempts. He scored multiple TDs on the ground in Week 2 against Minnesota and Week 5 at Arizona.

The third-year quarterback has also thrown just two interceptions in 184 pass attempts. They are the only giveaways this season by Philadelphia, which leads the NFL with a plus-12 turnover margin.

“We’ve got to be able to cause havoc and force them to make bad decisions,” said Highsmith, who is fourth in the NFL with 6.5 sacks. “That (means) getting after (Hurts). It starts by winning on first and second down. We have to stop the run then and when the time comes get after him in the pass.”

The Pittsburgh defense is tied for third in the league with eight interceptions, including three by safety Minkah Fitzpatrick (including a pick-6) and two by cornerback Cameron Sutton.

In addition to taking care of the football, discipline has been another key to the Eagles getting off to their best start since the 2004 squad started 7-0 en route to the Super Bowl.

Philadelphia committed just two penalties for 10 yards against the Cowboys.