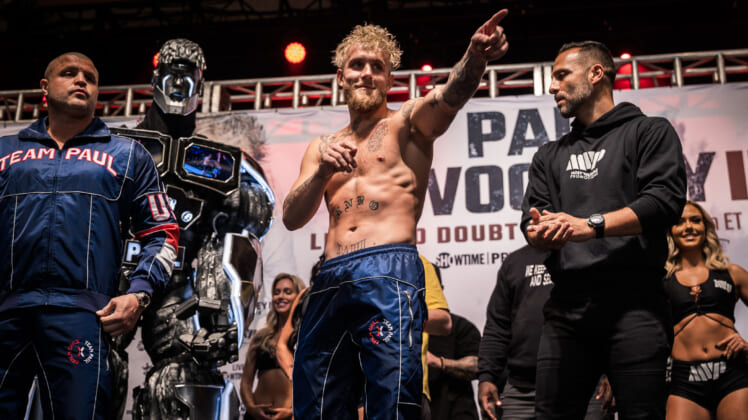 Jake Paul is claiming that his upcoming opponent Tommy Fury will not face him on Aug. 6 and that he is now in search of a new opponent a month before headlining an event inside New York’s Madison Square Garden.

In June, after much speculation, it was finally confirmed that Paul would be facing Fury in August. The pair were originally set to battle it out in December before a rib injury forced the Englishman out of their booking. Paul would go on to face former UFC welterweight champion Tyron Woodley on short notice in a rematch of their clash four months earlier. The 25-year-old was victorious by knockout.

Well, it seems as if history will repeat itself. On Wednesday, Paul took to his Twitter account and told his four million followers that for the second time a planned fight between him and the half-brother of heavyweight superstar Tyson Fury had been called off.

Over the last couple of weeks, the possibility of the fight falling through became likely when Fury was denied access to the United States for a press conference to hype the event in New York. “Me and my team this morning arrived at Heathrow airport ready for the press conference, ready to fly out, and as soon as I entered the airport I got pulled to one side and I was told by a Homeland Security officer that my ESTA had been denied and I wasn’t able to travel to the USA,” Fury said in a June 28 social media post.

In the days following the news, Paul used his massive social media reach to publicly push his opponent to do what needed to be done to make sure he could make the fight date, while also suggesting Fury may not live up to his obligations.

Today’s news seems to indicate that Paul’s sense the bout was in danger was prophetic.

It will be interesting who Paul and his management team decide on as a foe in August. His five-fight career has been carefully curated with low-risk, high-reward competition. It will be difficult to maintain that path on short notice. However, there is a built-in excuse if the Ohio native is handed a loss for the first time next month.