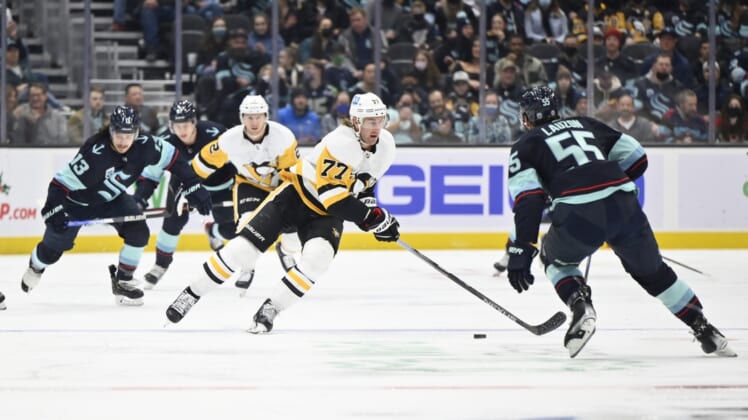 Jake Guentzel had two goals and an assist to extend his point streak to 13 games and Jeff Carter also scored twice, as the visiting Pittsburgh Penguins struck early in Monday night’s 6-1 victory over the Seattle Kraken.

Jake Guentzel had two goals and an assist to extend his point streak to 13 games and Jeff Carter also scored twice, as the visiting Pittsburgh Penguins found the back of the net three times over the first 5 minutes, 7 seconds of Monday night’s 6-1 victory over the Seattle Kraken.

Sidney Crosby — who extended his point streak to six games — and Danton Heinen each scored joined Carter in scoring three goals in the first 5:07 of the game. Heinen added two assists and Crosby added one.

The Penguins got 28 saves from Casey DeSmith for his first victory in five starts this season.

Guentzel has 12 goals and seven assists during the NHL’s longest active point streak, and 19 points while registering at least one in each of his 12 road games for Pittsburgh, which is amid a 7-2-1 stretch overall.

Jordan Eberle scored his team-leading 12th goal for the Kraken, who entered on a 3-0-1 stretch and looking for a fourth straight home victory. Seattle’s Joey Daccord made 24 saves in relief of Philipp Grubauer, who was pulled after allowing three goals on the first four shots he saw.

However, Grubauer was not completely to blame for his team’s early struggles. The Kraken failed to clear their own zone, resulting in Carter opening the scoring 1:47 into the contest.

Crosby was next, positioning himself in front of the net to push a rebound past Grubauer with 15:18 left in the opening period.

Just 25 seconds later, the Penguins made it 3-0 through Heinen, whose shot appeared to be deflected by a Kraken player, for his seventh goal. That chased Grubauer, who has allowed three goals in four consecutive starts.

Seattle got on the board through Eberle amid a delayed penalty and off a nifty give-and-go with Alex Wennberg at 3:43 into the second period. Eberle was back in the lineup after missing two games with a lower-body injury.

However, with less than 1:30 left in the middle period, Guentzel and Carter scored 23 seconds apart for the Penguins, who improved to 7-3-3 on the road.

Guentzel’s second goal of the night and 15th overall came with 11:31 left in regulation.