Jacksonville Jaguars head coach Urban Meyer is just a few months into his acclimation period to the NFL and with his first training camp approaching, there are already some frustrations.

Meyer knew there would be adjustments at the highest level. In college, he ran the Florida Gators and Ohio State Buckeyes exactly how he wanted. He’s now in the NFL, where the collective bargaining agreement and league rules dictate a lot more than he is accustomed to.

Coaching legend Jimmy Johnson, who won championships at both the collegiate and professional level, provided some insight on what he’s learned from Meyer as the 57-year-old goes through all this for the first time.

“He’s a little frustrated right now because he’s spent so little time with the players. He’s accustomed to being around the players all the time, and they weren’t able to do that because of COVID-19.”

Meyer has already learned there are consequences for violating rules. The NFL fined him $100,000 for holding contact practices during 11-on-11 drills at the team’s OTAs. The Jaguars received a $200,000 fine and must forfeit two OTA practices in 2022. 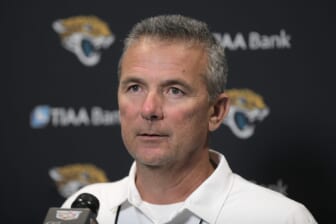 While some contact will be allowed at practices in training camp, there’s another adjustment Meyer must get familiar with quickly. He last coached in 2018 at Ohio State, long before the COVID-19 pandemic hit. Barring the Jaguars reaching the 85% vaccine threshold, there will be strict limitations on what players and coaches can do outside of practice.

It creates additional complications for a coach, especially one who got used to spending countless hours with student-athletes in college. But, as Johnson notes, these are all things that Meyer knew would happen before he took the job.

“He knew what he was getting into when he accepted the job. We had numerous conversations during the job process. And I think he’ll do a great job. He knows how important personnel is. He knows how to deal with people.”

There is also another element waiting for Meyer. When the Jaguars report for training camp, there will be a bigger media spotlight because of Tim Tebow and Trevor Lawrence. Everyone understands the No. 1 pick will be the starting quarterback in Week 1, but many wonder if Tebow’s NFL return is only happening because he’s friends with Urban Meyer. 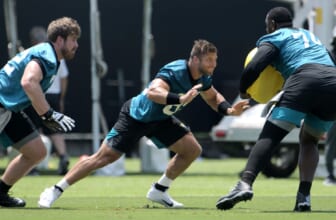 Whether Tebow makes the roster or not, everyone will also want to see if Meyer can stick in the NFL. With less control and facing far more difficult competition, this is a massive challenge. Ultimately, we’ll just have to see how long Meyer sticks it out.