Is Urban Meyer a tone-deaf coach who's destined to fail in the NFL? Or was his decision to sign Tim Tebow a subtle stroke of genius? Let's take a closer look.

As the Jacksonville Jaguars enter a new era under Urban Meyer, it’s fair to wonder if the head coach knows how to read a room, or if he even cares, and that is great news for Tim Tebow‘s chances to remain on the team.

Jacksonville has certainly made lots of headlines this NFL offseason, from hiring Meyer as to drafting Trevor Lawrence and, yes, signing Tebow. The sooner everyone can accept that Meyer is likely to keep Tebow and nothing but the player’s performance or lack thereof can change that, the easier it’ll be to move on from the perceived controversy.

According to CBSSports.com’s Jason La Canfora, for better or worse, Jacksonville has given Meyer influence over decision-making that rivals New England Patriots legend Bill Belichick, which means Tebow is likely a Jaguar to stay:

“Let’s be real clear here — this franchise is entirely in Meyer’s hands now. He quickly amassed Belichickian levels of control of this organization, owner Shad Khan gave him whatever he wanted when he hired him, and no one is going to tell him he can’t keep Tebow around as long as he likes.”

This means that Meyer, despite the presence of an experienced general manager in Trent Baalke, essentially has final say on personnel. It’s also a ton of pressure to put on a coach who takes losing so hard, and will have nowhere to look but in the mirror if things go horribly awry.

Being compared to Belichick is a backhanded compliment in this context, but for all of The Hoodie’s pull in Foxborough, the Patriots are historic winners. If Meyer proves to be anything close to that for the Jaguars, Tebow’s signing will ultimately mean little to nothing.

Meyer could’ve played it safe as he embarked on the massive undertaking of rebuilding this franchise. Instead, he’s already made an awful coaching hire he immediately needed to walk back on, drafted a possible third-down running back in the first round, and signed Tebow in the ultimate nepotistic transaction.

No one’s blaming Tebow, but Meyer’s shared history with him at the University of Florida is the only reason the former quarterback bust is getting a shot to convert to tight end after retiring from minor-league baseball.

Nepotism is prevalent in any industry. It’s not fair. That’s how it goes. Tebow wouldn’t have gotten this chance anywhere else in the NFL. His career as a professional athlete would’ve been over.

Tebow’s situation with Meyer is a one-of-one anomaly that can’t honestly be weighed against Colin Kaepernick’s lack of NFL job prospects or any other third-string tight end Tebow is “taking a spot” from.

That isn’t stopping every armchair critic from making that apples-to-oranges comparison, or suggesting racism or white privilege plays a role.

In this particular instance, it’s simply a matter of Tebow and Meyer having an extraordinary relationship. Yes, they’re both white, but their connection is based on the hard-earned, shared success they’ve had together. Really not much else to read into, contrary to public opinion. 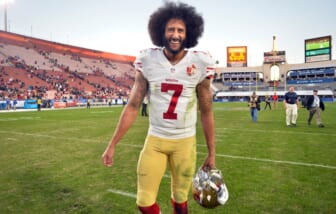 Urban Meyer needs to sell Tim Tebow to his players, not outsiders

It seems like Meyer is impervious to outside criticism, no matter how intense it is. He puts such high expectations on himself and detests losing to such a maniacal degree. He’ll know if the Jaguars aren’t up to snuff, and whether Tebow meets his gaudy standards.

The only thing Jacksonville’s new coach has to do is sell the Tebow signing to the men in his locker room. Lots of players might be inclined to roll their eyes, or not embrace Tebow as a teammate.

By all accounts, with every team he’s ever been on, Tebow has been nothing but a relentless worker, a good teammate and a strong leader with off-the-charts intangibles in that regard. The Jaguars play in such a small market, so Tebow won’t bring in the media circus of yesteryear, which should help the cause for all involved.

Meyer’s decision to sign Tebow is widely viewed as a gimmicky sideshow with no chance of working. It’s all ego-driven, and Meyer is going to do everything he can to make it work. 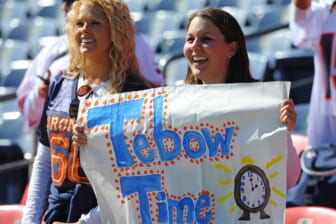 OK, so what if Meyer has a bit of a vanity project for a player he has a soft spot for? Teams hang on to players too long all the time, hoping they’ll pan out. It’s not like Tebow signed a lucrative contract. He has zero guaranteed money on his one-year deal.

In all likelihood, Meyer will keep him around for as long as he can. Get over it. Again, in the grand scheme of things, it won’t matter much.

If Urban Meyer can take the heat, Tim Tebow distraction may be a good thing

On the extremely off chance that Tebow becomes a legitimate NFL tight end, it’ll look like a totally genius move on Meyer’s part. Otherwise, Tebow will be released if he can’t cut it, and won’t cost the Jaguars any additional cash.

Realize what’s happening while all this Tebow Mania is going on. The rest of Jacksonville’s players are out of the spotlight.

Lawrence was just the No. 1 overall pick in the 2021 NFL Draft. He should absolutely be the top storyline for the Jaguars. Instead, he’s quietly preparing for his rookie season, the low-revenue Jags are selling tons of Tebow jerseys and buzz is still building around the team much more than before.

There’s no question Meyer is pushing the notion that no press is bad press. He’s never been the most cautious or risk-averse coach at any of his prior stops, yet he’s always won immediately wherever he’s gone.

Signing Tebow seems like another decision Meyer didn’t think all the way through. In reality, it may be the perfect distraction to not only rally the Jaguars together, but also, in a weird way, to take pressure off their most significant players.

While everyone is wasting energy airing grievances about the injustice of Tebow reuniting with Meyer, the coach who’s posted a combined 39-8 first-season record across his prior four head coaching jobs is pressing on to help the Jags be competitive in a wide-open AFC South. His mind was made up about Tebow weeks ago. He’s not having second thoughts or dwelling on this, and you can bet none of his players are, either.

As long as Meyer and Lawrence help markedly improve Jacksonville’s record from 1-15 last season, they’ll be the toast of Duval County, and Tebow, whatever his role looks like as an on-field contributor, will be an afterthought.

Because guess what? The Jags’ success or failure has much more to do with Lawrence and what the team does defensively than anything involving Tebow.

Meyer’s organizational influence likely means Tebow stays. Good for him. It’s a small price for the Jaguars to pay if Meyer is the raging, winning success he’s been throughout his coaching career, is it not?