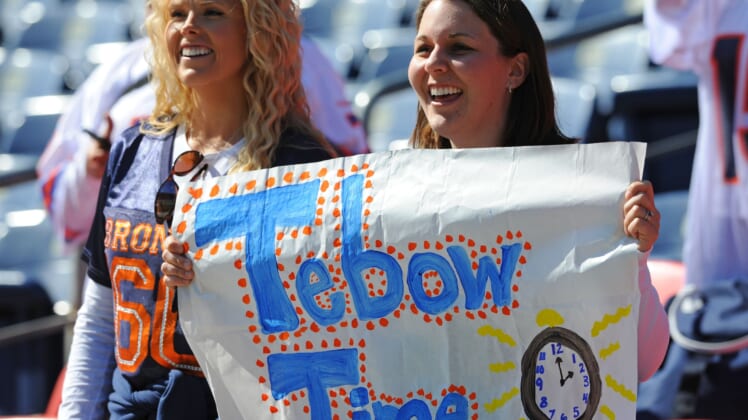 Oct 9, 2011; Denver, CO, USA; Denver Broncos fans cheer towards quarterback Tim Tebow (15) (not pictured) as he warms up before the start of the game against the San Diego Chargers at Sports Authority Field. Mandatory Credit: Ron Chenoy-USA TODAY Sports

Tim Tebow is back in the National Football League, returning to the NFL for the first time since he was cut in 2015. As the 33-year-old prepares for an unexpected comeback, the challenge will be even more difficult as he transitions to a new position.

Tebow will be reuniting with his former college coach Urban Meyer, reportedly signing a contract with the Jacksonville Jaguars. While there is some divide in Jacksonville over the signing, Meyer seems confident that his close friend and former quarterback can handle switching to tight end.

It’s a tall task. Tebow never caught a single pass during his four seasons with the Florida Gators and wouldn’t convert to tight end during his NFL career. After he flamed out of the league as a quarterback, Tebow pursued a career in professional baseball and spent a few years with the New York Mets’ minor-league affiliates.

If not for Meyer, Tebow likely wouldn’t have received an opportunity to even workout for an NFL team. But the duo’s close relationship could lead to Tebow earning a spot on the Jaguars’ roster in 2021. While many doubt the position switch is successful, former Jacksonville Jaguars tight end Marcedes Lewis believes it could be done.

“He gets it. With the right coach, in the right system, he’s athletic, and, if he’s willing, he’ll be able to get it done.”

Green Bay Packers TE Marcedes Lewis on whether or not Tim Tebow can play tight end, via TMZ Sports

Lewis, a first-round pick in the 2006 NFL Draft, spent his first 12 NFL seasons with the Jaguars. He starred in 2010, making the Pro Bowl and earning second-team All-Pro honors. Across 170 games with the franchise, he hauled in 375 receptions for 4,502 receiving yards and 33 touchdowns.

Jacksonville is pretty desperate at tight end. The organization spent a fifth-round pick on Luke Farrell, who Meyer recruited and coached at Ohio State. Outside of his presence on the roster, there aren’t any safe bets to be with the Jaguars in Week 1.

Ultimately, the Jaguars’ decision to sign Tebow comes down to generating fan interest and providing a voice in the locker room who looks up to Meyer. Tebow remains beloved in Florida and his jersey would likely be very popular if he makes the roster. Given Jacksonville doesn’t project as a playoff team in 2021, it’s possible he makes the team.