Tim Tebow may have signed with the Jacksonville Jaguars as a result of nepotism, but head coach Urban Meyer didn’t allow sentiment to cloud his judgment when it became clear the quarterback turned tight end couldn’t cut it.

Tebow was released by the Jaguars on Tuesday, mere days after an underwhelming preseason showing amid their first wave of roster cuts, and thanked the organization for the opportunity in a social media post:

The 34-year-old hadn’t played in a regular-season NFL game since 2012, and more recently tried to make his way through minor league baseball in the New York Mets farm system before retiring from that pursuit.

While Meyer entertained the idea of Tebow returning to pro football and trying to get him to convert to a new position, it was clear the latter wasn’t up to the task.

Even with Jacksonville fielding an unheralded group of tight ends to begin with, Tebow still couldn’t stand out enough to even merit faint consideration for the final 53-man roster. He just couldn’t hold up at the point of attack, and while he was a bruising ball-carrier as a QB, blocking edge defenders and linebackers is an entirely different brand of physicality.

Click here for our full breakdown of the Jaguars’ 2021 schedule

It felt like Meyer would give Tebow as long of a leash as possible as he adjusted to his position change. However, it’s clear that the coach prioritized building a culture and giving himself the absolute best chance to win immediately in the NFL over a feel-good reunion if Tebow was going to take a roster spot over a more deserving player. 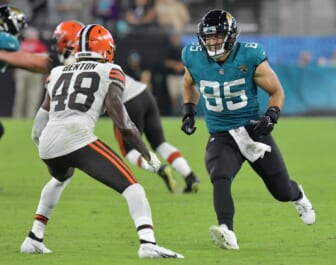 The Jaguars have an intriguing rookie class headlined by No. 1 overall pick Trevor Lawrence that will hopefully help the team turn around quickly after 1-15 record last season. Meyer has been an instant success at all his previous coaching stops, but all of those were at the collegiate level. He and Tebow shared time and made history at the University of Florida, which led to Tebow’s shot in the first place.

Unfortunately for Tebow, a return to the gridiron simply wasn’t meant to be. His athletic career is likely over at this point, and Jacksonville can move on without worrying about any sort of media circus that would’ve ensued if the stunt signing of Tebow resulted in him overstaying his welcome.

Can the Jaguars win the AFC South or make the postseason this year? Check out our NFL playoff predictions now