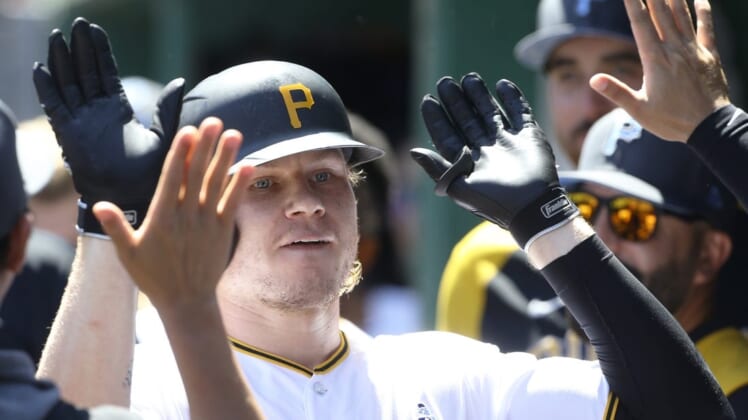 Jack Suwinski’s third home run of the game Sunday came walk-off style in the ninth inning as the Pittsburgh Pirates avoided a series sweep with a 4-3 win over the visiting San Francisco Giants.

After the Giants tied the game in the top of the ninth, Suwinski led off the bottom of the ninth against Tyler Rogers (0-3) with a shot to right on a 1-1 pitch.

It was Suwinski’s 11th homer, leading all major league rookies. It was first multiple-homer game.

Hoy Park added a solo homer for the Pirates, who had lost 11 of 12.

David Bednar (3-1) pitched the final two innings for the Pirates, giving up one run and one hit, with four strikeouts and one walk.

Thairo Estrada hit a solo homer and Joc Pederson two-run single for the Giants, who had won seven of eight.

San Francisco starter Alex Cobb, fresh off the injured list because of a neck strain, pitched four innings, giving up two runs and four hits, with two strikeouts and one walk.

The Giants got one hit in the first but parlayed that into a 2-0 lead. Luis Gonzalez wound up at second on a grounder to second, thanks to Park’s error. Mike Yastrzemski and Wilmer Flores walked to load the bases with no outs. Pederson drove in two with a single to left.

Keller got out of that by getting Brandon Belt to ground into a double play, with Flores going to third, and, after hitting Estrada with a pitch, striking out Tommy La Stella.

With one out in the third, Park launched his first homer, to right-center, to cut it to 2-1.

In the fourth, also with one out, Suwinski homered to right for a 2-2 tie.

Against Sam Long in the sixth, Suwinski unloaded his second homer of the game, to right-center, to give Pittsburgh a 3-2 lead.

Estrada tied it 3-3 leading off the ninth off Bednar with his fifth homer, to left.