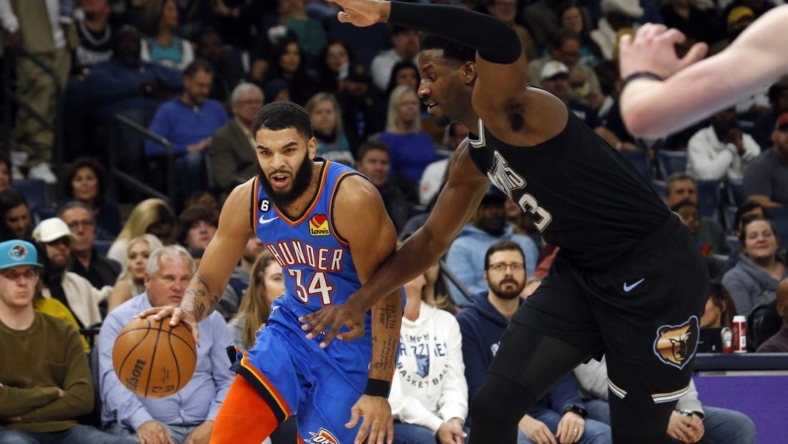 Jaren Jackson Jr. had 25 points and matched his career high with 12 rebounds as the Memphis Grizzlies never trailed in a 121-110 win over the visiting Oklahoma City Thunder on Friday night.

Memphis star Ja Morant had 19 points and 11 assists on 5-for-20 shooting before hobbling to the locker room due to a left ankle injury with 3:09 remaining. John Konchar made five 3-pointers and finished with a career-high 19 points and 10 rebounds.

Dillon Brooks scored 16 points, Santi Aldama added 15 and Tyus Jones had 13 for the Grizzlies, who snapped a two-game losing skid and improved to 6-1 at home.

Giddey had 20 points and 11 assists for the Thunder, while Jalen Williams had 16 points, seven assists and six rebounds while Shai Gilgeous-Alexander scored a season-low 15.

Jeremiah Robinson-Earl scored 14 points as Aleksej Pokusevski and Aaron Wiggins added 10 apiece for Oklahoma City, which concluded its longest road trip of the season with a 2-2 record. Pokusevski exited the game before halftime with a left ankle sprain and did not return.

Jackson played 25 minutes and added two steals and three blocks in his second game after missing the first 14 while recovering from right foot surgery.

Memphis opened the game with a 19-5 run before Oklahoma City rallied behind Pokusevski, who had all of his 10 points and three blocks in the first quarter.

Jackson scored 18 points in the first half for the Grizzlies, who led 63-59 at the break. Gilgeous-Alexander was held to eight points on 3-for-10 shooting.

Memphis was unable to create much separation in the third quarter, and Oklahoma City cut the deficit to 71-67 with 7:40 left.

Gilgeous-Alexander, who entered the game ranked fourth in the league in scoring at 32.3 points per game, finished with six rebounds and six assists while shooting 6-for-18 from the field.