Prior to their game against the Los Angeles Dodgers on Tuesday night, the Oakland Athletics traded super utility man Ben Zobrist to the Kansas City Royals. This came on the heels of the team moving starter Scott Kazmir and closer Tyler Clippard.

In what amounts to a fire sale, the A’s received solid returns for Clippard and Zobrist while seemingly striking out in their bounty for Kazmir. Such is the nature of the beast during MLB’s trade deadline. We are also best served waiting years down the road to draw an ultimate conclusion there.

All this comes less than a calendar year after the A’s boasted the best record in baseball and were favored to win the World Series.

In the year since, general manager Billy Beane has managed to gut the team’s roster of six of its seven All-Stars from a season ago. In the process, the multi-time MLB Executive of the Year has forced us to question whether he’s still on his game.

It’s been a disastrous stretch for the A’s overall. Since the start of the 2014 second half through Tuesday’s win against the Dodgers, the A’s boast a 74-95 record. From the start of the second half of the 2013 season all the way up to the All-Star break last year, the Oakland was 36 games over .500 in a full 162-game slate.

Talk about a regression of epic proportions.

If we are being completely honest here, this downward trend started when Beane shipped top prospect Addison Russell to the Chicago Cubs in exchange for starters Jeff Samardzija and Jason Hammel last July. While Samardzija did put up a respectable 3.14 ERA and low 0.93 WHIP, he finished one game under .500 in his 16 starts with the team. Meanwhile, Hammel was pretty much a disaster, tallying six losses in eight decisions as a rental for the A’s in the second half.

The A’s then sent fan favorite Yoenis Cespedes to the Boston Red Sox in exchange for starting pitcher Jon Lester in a move that focused solely on the team contending for a title last October. While Lester put up a solid 6-4 record with a 2.35 ERA in his stint with Oakland, it wasn’t enough to get the team past the eventual American League champion Kansas City Royals in the wild card playoff.

At the end of the day, Oakland went all in last year. It sent its top hitter to Boston for what was nothing more than a rental player. Prior to that, the team sent its top prospect to the Cubs for a solid starter in Samardzija it would end up moving months later.

While we all know the A’s struggles since these two high-profile trades went down, what makes them complete disasters is how the players they sent packing have performed. Cespedes is hitting .283 with 21 homers, 90 RBI’s and 38 doubles in 146 games since the trade. For his part, the 21-year-old Russell has taken on a full-time role with a contending Cubs team.

The larger issue here is Beane changing up strategy in the spur of the moment simply because of the product he’s sees on the Major League diamond. That might work for bigger-market teams, but it’s not a strategy that makes sense for a cash-strapped organization like the A’s.

The latest example of this is an attempt to build talent across all levels of the A’s farm system after gutting said system just over a year ago.

Listen, Oakland got a nice return for Zobrist on Tuesday. It acquired the Kansas City Royals second-ranked prospect in the form of starting pitcher Sean Manaea. The team also picked up fellow pitcher Aaron Brooks, who will start for the big club on Saturday. Not a bad haul for a 34-year-old veteran that’s set to become a free agent in the winter. Oakland also nabbed a solid starting pitching prospect in Casey Meisner from the New York Mets in the Clippard deal.

All this is fine and dandy. None of the three players Oakland has dealt over the past 10 days or so were going to be returning to the team next season. It shouldn’t come as a surprise that they were moved.

But let’s look at where the A’s stand now. They seem to be stuck somewhere between full-scale rebuild and a small hope at contention in 2016. Despite boasting a 45-56 record on the year, Oakland has put up a plus-39 run differential—good enough for 11th in the Majors. It’s second in the AL in ERA, first in shutouts, second in quality starts and third in batting average against. Following his complete game shutout on Tuesday, Sonny Gray now boasts the best ERA of any qualified starter in the AL.

Offensively, the likes of Stephen Vogt, Josh Reddick and Billy Burns have put up quietly good seasons. Oakland also boasts a solid young hitting tandem in the minors in the form of Matt Olson and Matt Chapman. 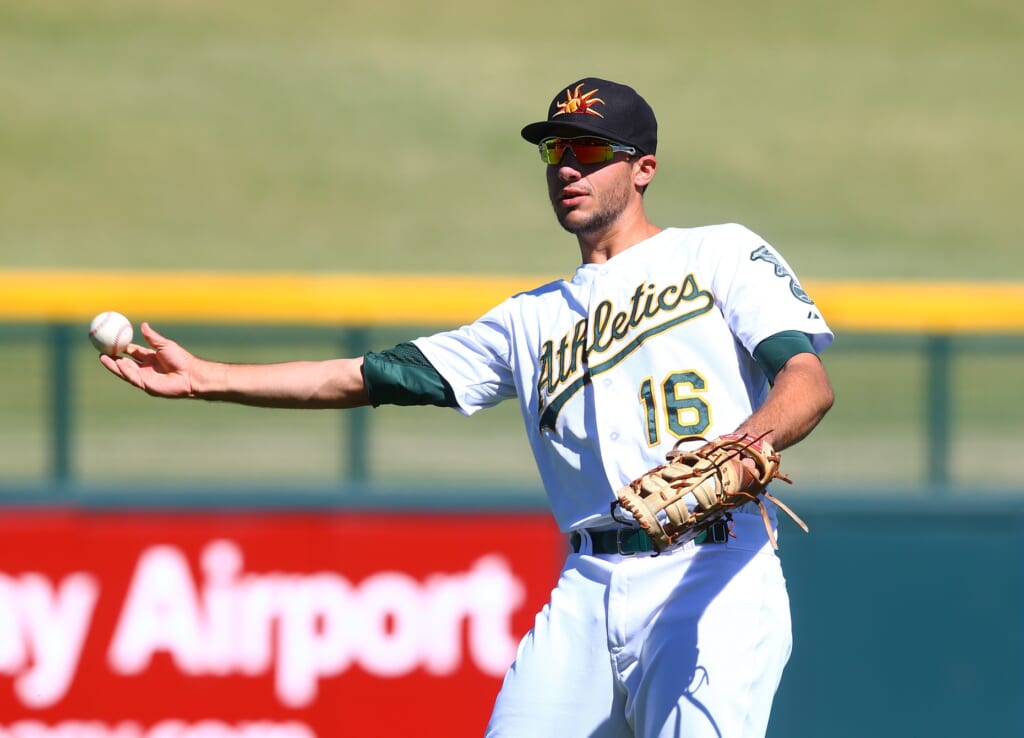 Courtesy of USA Today Sports: The A’s have talented hitters in the farm, Matt Olson included.

Still, the issue here is a lack of direction. As of right now, three of the A’s top-11 prospects consist of players that were acquired over the past nine days. That just goes to show us how weak their farm system was prior to the trio of deals mentioned above. But who is to say Beane won’t change direction once again this winter by trading away his top prospects for a veteran or two?

Oakland hasn’t exactly represented a long-term approach in its philosophy over the years. And in reality, that’s the best approach with small-market team that needs to win to put butts in the seats. Beane has proven time and again that he’s not afraid to trade untouchable commodities, the likes of Tim Hudson, Mark Mulder and Josh Donaldson included. What’s to stop him from looking at Gray as nothing more than an asset to build a stronger farm system? That possibility is only magnified by Beane’s own change of approach from short-term contention to a long-term plan over the past several days.

Without an identified direction moving forward, A’s fans will be left to wonder if their favorite players will be on the team the next day. And a fan base without any sense of loyalty to specific players is one that will stop showing up to games altogether. This could lead to even more financial turmoil for an organization that is supposedly as cash strapped as any in baseball, the end result being the A’s turning into a minor league system for other teams’ stars.