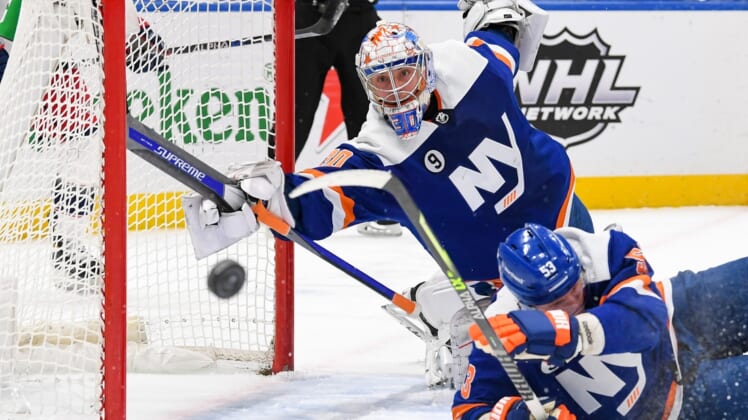 Anders Lee posted his first career hat trick and Ilya Sorokin stopped all 25 shots he faced as the New York Islanders rolled to their most resounding victory at their new building by beating the Columbus Blue Jackets 6-0 on Thursday.

The shutout was the sixth of the season for Sorokin and the ninth of his career.

Brock Nelson, Josh Bailey and Jean-Gabriel Pageau also scored for the Islanders, who had not scored more than four goals in any of their first 27 games at UBS Arena. New York has alternated losses with wins over the first four games of a six-game homestand.

Goalie Joonas Korpisalo made 27 saves for the Blue Jackets, who have lost four straight (0-2-2). Columbus is 13 points behind the Washington Capitals in the race for the final wild card spot in the Eastern Conference.

In the first period, Jake Bean was whistled for slashing, and Sorokin turned back a short-handed breakaway chance by Boone Jenner. Vladislav Gavrikov then drew a high-sticking penalty to set up the 5-on-3 that yielded Nelson’s nifty goal.

Nelson, facing his teammate, took a pass from Bailey and was able to corral the puck while skating backward. He whirled and fired a shot that Korpisalo could not smother; the puck trickled between his legs with 9:28 left in the first.

The Islanders put the game away by taking advantage of some sloppiness by the Blue Jackets to score three times in under 12 minutes in the second.

Kyle Palmieri, battling for the puck with Gavrikov following a long clearing pass by Noah Dobson, got possession long enough to poke a pass under the legs of Dean Kukan to Bailey, who beat Korpisalo from point-blank range at the 6:08 mark. It was his first goal since Jan. 18.

A pair of turnovers by the Blue Jackets led to the Islanders’ next two goals. Patrik Laine couldn’t shake Anthony Beauvillier, who picked off Laine’s pass to Zach Werenski and dished to Lee, who scored from just inside the slot with 6:11 left.

Ryan Pulock pestered Jakub Voracek into a neutral-zone turnover that resulted in Pageau’s short-handed goal with 2:16 remaining in the second.

Beauvillier was twice turned back by Korpisalo before Lee swooped in and put back the rebound with 8:03 left in the game.

Lee, playing in his 568th NHL game, completed the hat trick by scoring on the power play with 1.3 seconds left.