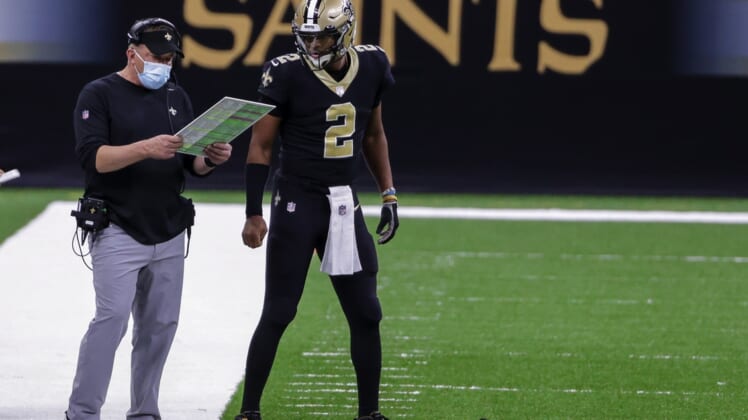 The New Orleans Saints have a big decision to make at quarterback for 2021, and head coach Sean Payton seems bullish on Jameis Winston as the man under center.

Payton spoke out Wednesday about Winston’s potential future in New Orleans, implying the former No. 1 overall pick is firmly in the mix for the Saints’ starting QB gig in 2021 if Drew Brees retires as he’s expected to.

Luke Johnson of the New Orleans Advocate documented what Payton had to say in an interview with NFL Network’s Kay Adams about Winston and the future of the Saints’ quarterback position:

Payton has also used any excuse he can to get Taysom Hill on the field, and it was Hill who actually started over Winston during the 2020 campaign when Brees was out for an extended period of time due to injury.

After going 3-1 as a starter, Hill ceded the reins back to Brees and reverted to his usual playmaker role at tight end.

As Payton said in Wednesday’s interview, though, Winston didn’t have the benefit of being in New Orleans’ offense for multiple years like Hill did. Winston joined the Saints on a one-year contract and was further hindered by the lack of an offseason, training camp and preseason to get prepared.

These circumstances suggest if Winston returns in 2021, not only could he compete with Hill for the starting gig — he could win it outright and change the trajectory of his career.

Payton has fervently backed Hill as the potential QB of the future, yet his glowing remarks about Winston suggest the narrative as to who Brees’ successor will be is changing.

Can Jameis Winston be a successful long-term QB?

Winston has flashed the ability to be a top-tier quarterback throughout his NFL career, yet the last time he got extensive action was in 2019 with the Tampa Bay Buccaneers. Although he threw for over 5,000 yards, he also tossed an NFL-record 30 interceptions as the Bucs went 7-9.

Under the leadership of Tom Brady this season, that largely same Tampa Bay team is set to play in Super Bowl LV. Had Winston kept his penchant for turnovers under better control, he might still be with the Bucs right now, albeit perhaps not playing for a championship.

Having been around the Saints’ winning culture and learned Payton’s perpetually successful scheme, though, Winston is liable to look at New Orleans as one of his prime free-agent destinations. It doesn’t feel like there’s a more obvious team to compete for a starter’s role.

Not only is Brees likely retiring, but the Saints are too far back in the 2021 NFL Draft to trade up for a young quarterback, and are in too dire of straits with the NFL salary cap to pursue another veteran player. Winston did throw a long touchdown in the Divisional Round of the playoffs for New Orleans. Other than that, though, he’s largely unproven since his error-prone tenure in Tampa Bay.

If Payton is a believer, well, that worked once upon a time when every other team was ready to write Brees off, and we know how that turned out. Perhaps the fresh start with the Saints, and Payton’s full confidence in him, is precisely what Winston needs to thrive as the franchise quarterback he ultimately failed to be for the Buccaneers.