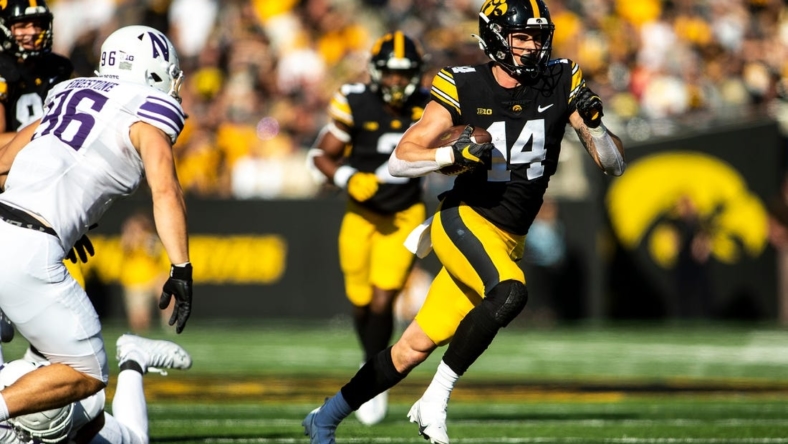 Senior quarterback Spencer Petras threw for one touchdown and ran for another as host Iowa snapped a three-game losing streak by thrashing Northwestern 33-13 in Big Ten action Saturday afternoon in Iowa City.

Northwestern (1-7, 1-4) dropped its seventh game in a row as standout running back Evan Hull was limited to 32 rushing yards and 5 catches for 25 yards. Freshman quarterback Brendan Sullivan completed 23 of 30 passes for 159 yards and two scores, but he was sacked seven times and threw an interception.

After winning a week-long battle to remain Iowa’s starter, Petras marched the Hawkeyes to Northwestern’s 12-yard line on the game’s opening drive and claimed a 3-0 lead on Stevens’ 29-yard field goal.

The Hawkeyes finished the job on their second possession as Petras capped a 59-yard drive with a 1-yard sneak to give Iowa a 10-0 lead with 31 seconds left in the first. Meanwhile, Northwestern finished the first quarter with 14 total yards.

Iowa mixed outside runs with short passes to go 85 yards on its third drive, but Northwestern’s defense stiffened inside the 10 and forced Iowa to settle for Stevens’ 24-yard field goal for a 13-0 lead with 2:45 to go in the half.

After the Hawkeyes forced Northwestern into another three-and-out, Petras led a brisk 2-minute drill. Iowa’s 50-yard drive concluded with Luke Lachey’s 6-yard touchdown catch with 22 seconds left to give Iowa the 20-0 halftime bulge.

The Wildcats finally forced an Iowa punt on its first second-half possession — and Tory Taylor’s 13-yard shank set up Northwestern at Iowa’s 34. The Wildcats capitalized as Sullivan hit tight end Duke Olges for a 1-yard score on fourth-and-goal to cut their deficit to 20-7 at 6:17 of the third.

The Hawkeyes clinched matters with 5:13 left when Arland Bruce IV took a jet sweep around right end for a 23-yard touchdown.