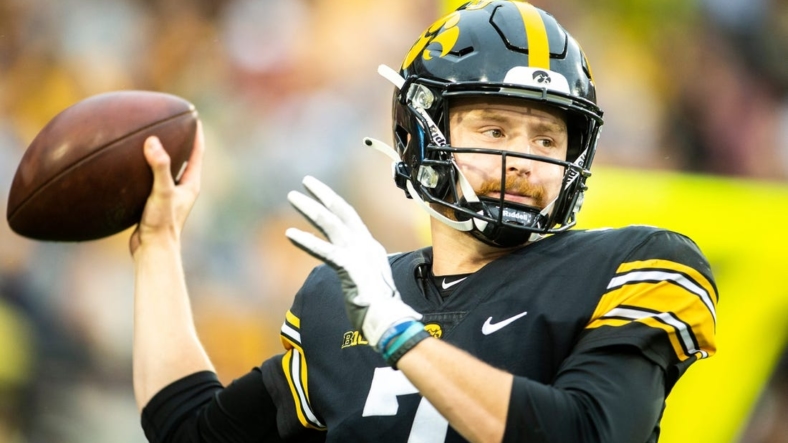 The Iowa Hawkeyes rank last in the nation in both scoring and total offense, but coach Kirk Ferentz decided Tuesday to stick with quarterback Spencer Petras for Saturday’s nonconference game against visiting Nevada.

The Hawkeyes are averaging seven points and 158 yards per game, the latter easily the worst among the nation’s 131 FBS programs. Colorado State, ranked 130th, averages 232.5 yards.

Petras is just 23-of-51 passing (45.1 percent) for 201 yards, no touchdowns and two inceptions in the two games. Alex Padilla, who started three games last season when Petras was hurt, is the backup.

“We obviously spent a lot of time looking at it, considering it, talking about it,” Ferentz said at a Tuesday press conference. “It’s really tough to give an honest evaluation right now. I’ve talked to Alex about the same thing. No matter who’s in there right now, we’ve got some challenges, and we’ve got to work through those and try to improve in those, and then we’ll have a fairer way to assess.”

Petras passed for 1,880 yards, 10 touchdowns and nine interceptions in 12 games (11 starts) last season. He was the named the 2022 starter shortly before the start of this season.

But Iowa (1-1) has scored just one touchdown in two games. The Hawkeyes beat South Dakota State 7-3 with a field goal and two safeties in the season opener and again struggled in last Saturday’s 10-7 loss to Iowa State.

Iowa fans have been harshly critical of the offense — Brian Ferentz, son of the coach, is offensive coordinator — and the head coach has noticed.

“I’m not asking anybody to agree with me,” Kirk Ferentz said. “I’m guessing fans aren’t agreeing, and maybe the media, but everybody’s entitled to their opinions, I’m all for that. What our jobs are, and my job, ultimately, I’m the head coach, is to decide what’s best for our football team and our program. That’s my assessment at this point.”