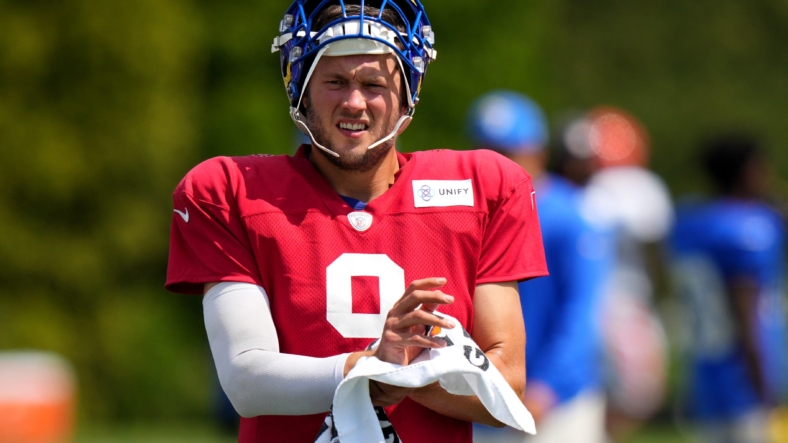 After winning the Super Bowl a year ago, we haven’t seen Los Angeles Rams quarterback Matthew Stafford throw a pass in a game since February. It concluded a long season where the gunslinger attempted a ridiculous 741 passes, including postseason play. Yet, after winning the first Lombardi Trophy of his career, it’s hard to say the effort wasn’t worth it.

Unfortunately, Stafford is now dealing with elbow issues, which the franchise’s medical team has been working to manage all offseason. Yet, if you ask head coach Sean McVay or general manager Les Snead, they’re downplaying the severity of Stafford’s injury as they continue to limit Stafford in practice sessions.

One NFL insider, specifically ESPN’s Dan Graziano, believes Stafford’s elbow tendinitis problems won’t go away any time soon, and he sees them being an issue all season.

If true, this would appear to be the biggest threat to the Rams potentially running it back for consecutive trips to the NFL’s final stage. While the roster as a whole is as strong as can be, no one sees John Wolford or Bryce Perkins as viable backups should Stafford be forced to miss an extended stretch.

As expected, the 34-year-old QB didn’t play a single snap in the preseason, but now Stafford’s just days away from making his regular season debut against Josh Allen and the Buffalo Bills. In a matchup that’s sure to feature a lot of points, coach Sean McVay won’t be able to hide his prized $160 million QB on the sideline.

Stafford will be asked to make big throw after big throw, as that’s what the Rams offense is predicated on. They’re not going to beat one of the best rosters in football by relying on their stable of running backs led by Cam Akers and Darrell Henderson. Cooper Kupp wants a chance to prove he’s the best wide receiver in the league after winning the receiving Triple Crown and finishing with the Super Bowl MVP in his trophy case.

It should be apparent early on just how Stafford’s arm is feeling. But even then, if Stafford manages to fire strike after strike, it’s more about how he does the next week and the following week. Stafford hasn’t been throwing many passes as of late, but since the Rams typically ask him to throw 40+ times per game, this is an injury that could get worse as the season goes on.