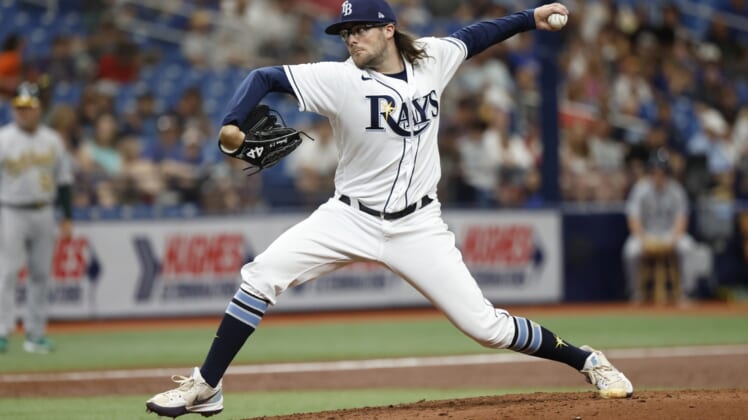 The Tampa Bay Rays, after losing 4-2 Monday night in the opener of a three-game at Chicago, need a good showing by Josh Fleming against the Cubs on Tuesday.

In a rotation riddled by injuries to Ryan Yarbrough, Luis Patino and top prospect Shane Baz, the Rays will send out the left-handed Fleming in a bulk-innings relief role as they try to even the three-game series.

Yarbrough is sidelined by groin tightness, Patino is out for a lengthier stint with an oblique injury, and the highly touted Baz, 22, had minor elbow surgery and has been shut down from throwing.

The Rays have struggled to cope, losing five of their past six games.

Yarbrough is nearing a return but will need a bullpen session. He likely will debut when Tampa Bay hosts the Boston Red Sox this weekend.

Rays manager Kevin Cash got a sharp start Monday from Shane McClanahan (six innings, two runs, one earned), whose career-high nine strikeouts moved him into the major league lead with 24.

“He was awesome,” said Cash of his southpaw, who became the first Rays starter to make it to the sixth inning. “Mac is doing some special things here through three starts right now.”

Wander Franco (right quad tightness) was a late scratch, but Cash said the young star would have pinch-hit if the Rays had put a second runner on base in the ninth against Cubs closer David Robertson.

Tampa Bay right-hander Matt Wisler (0-0, 1.93 ERA) will make his sixth appearance and first start. However, he likely won’t go past two innings before handing the ball to Fleming (1-1, 4.05), who will pitch for the third time this year and make his second start.

Fleming will be making his first career appearance against the Cubs.

The Chicago offense continues to impress, as Patrick Wisdom and Frank Schwindel homered Monday. Hot-hitting Seiya Suzuki went 2-for-3 with two runs and is hitting .429.

Suzuki collected a hit in his ninth straight game to start his career, matching the organizational record set by Andy Pafko in 1943.

Ian Happ (.345) hit a seventh-inning single that proved to be the game-winner, helping Chicago earn a victory for the fourth straight series opener to start the season.

The Cubs’ bullpen came through after starter Kyle Hendricks exited after 4 1/3 innings of two-run ball.

Winning pitcher Keegan Thompson (2-0) remained spotless by firing 3 2/3 innings of dominant ball. The right-hander allowed one hit and one walk while striking out five.

In three outings totaling 9 2/3 innings, Thompson has yielded four hits and two walks. He has whiffed 10, and batters are hitting .129 against him.

“We have other guys out there too that we feel like they can do that,” Cubs pitching coach Tommy Hottovy said. “But Keegan’s just proven over and over now that he could handle that moment and that role.”

Robertson took over for Thompson in the ninth inning and earned his fourth save.

The Cubs will send out Justin Steele (1-0, 1.93 ERA) on Tuesday for his third start. Like Fleming, the Chicago left-hander will face the opposition for the first time.