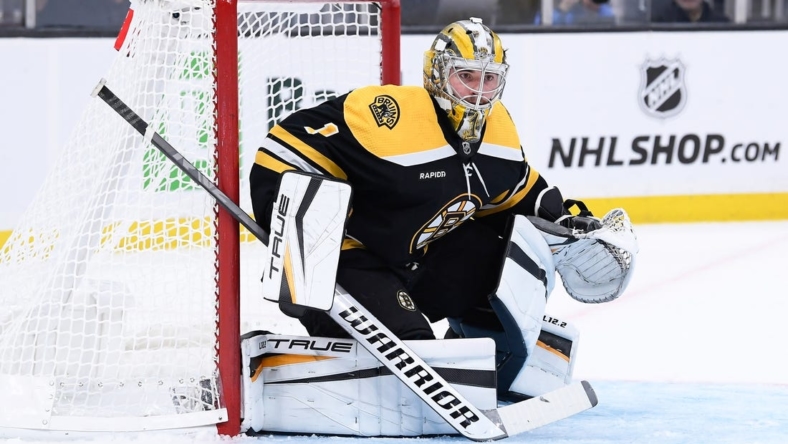 The Boston Bruins will be without goaltender Jeremy Swayman and defenseman Derek Forbort for a while, as coach Jim Montgomery termed both players week to week Thursday.

Swayman left Wednesday’s 6-5 overtime win over the Pittsburgh Penguins during the second period with a lower-body injury after Boston teammate Patrice Bergeron fell into him. Forbort (upper body) left during the first period of the same game after blocking a shot.

Linus Ullmark has started more games than Swayman thus far and will shoulder the load during Swayman’s absence. He will start for Boston on Thursday against the host New York Rangers.

The Bruins recalled goalie Keith Kinkaid from AHL Providence on an emergency basis.

Swayman is 2-1-0 through four games (three starts) this season with a .878 save percentage and a 3.45 goals-against average. Forbort had a goal and two assists through 10 games.

Boston (9-1-0) has surged to the top of the Eastern Conference standings despite starting the season with multiple injured players. Top-line forward Brad Marchand (hip) and key defensemen Charlie McAvoy (shoulder) and Matt Grzelcyk (shoulder) all underwent offseason surgeries and missed the beginning of the season.

While Marchand and Grzelcyk have since returned to the lineup, McAvoy is still rehabbing but returned to practice last week. Per ESPN, Montgomery said Thursday that he still had “boxes to be checked” before returning to game action.

“This is his first week getting back into a rhythm with us,” Montgomery said. “We’re just hopeful with him. No updated timeline. We have an internal process with him. He’s ahead of that Dec. 1 date, but we don’t know exactly.”

Also Thursday, Montgomery said forwards David Krejci (upper body) and Craig Smith (upper body) are day to day and will not play against the Rangers. They could be ready for Boston’s next game, Saturday at the Toronto Maple Leafs.