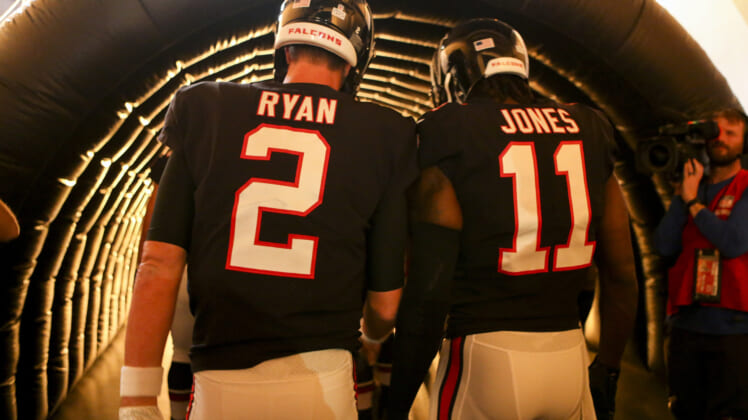 Few would argue against the idea that Julio Jones has been among the best wide receivers in the NFL since entering the league as the sixth overall pick in the 2011 NFL Draft.

Yet, we haven’t seen the same version of Jones for the last two years, where he’d frequently outmuscle and outhustle opponents for every last yard to be had.

Instead, the seven-time Pro Bowl receiver has struggled with hamstring injuries, being ineffective in his final year with the Atlanta Falcons before having an even worse year with the Tennessee Titans.

After a 434-yard season with just one touchdown, Jones was released from the squad on March 16.

Ever since, there’s been few reports connecting the 33-year-old receiver to a new team.

Now that the NFL Draft has concluded, with training camps near, the market for Jones and others is expected to pick up.

One potential solution links the quarterback Jones experienced seven 1,000-yard seasons with, by joining Matt Ryan and the Indianapolis Colts, and according to Dan Dakich, it’s become a possibility with the team doing their due diligence on the 6-foot-3 wide receiver.

What can Julio Jones bring to the Colts?

Now that Matty Ice has landed in new digs with the Colts, he may be looking to bring his former teammate of 10 seasons with him, by convincing the front office to sign Julio Jones. Looking at the production the two experienced in their first go of it in Atlanta, why shouldn’t the Colts at least look into it?

Signing Jones at this stage wouldn’t cost much in terms of salary, and with T.Y. Hilton still unsigned, it’s possible the team, and even their new QB would much prefer to see if they can rekindle the old magical connection between Ryan and Jones.

If signed, Jones would likely start opposite Michael Pittman Jr. as the WR2, with Parris Campbell and Alec Pierce mixing in both outside and from the slot. Even if Jones experiences more injury troubles, or has generally slowed down, giving Ryan a familiar target could help jumpstart the Colts from the beginning.

With even one more win possibly being the difference between sitting at home or participating in the playoffs, the idea of signing Jones could be more and more attractive for the Colts by the day.

Back in 2016, Ryan and Jones were just a touchdown away from winning a Super Bowl ring in the 28-3 debacle, now six years later, the dynamic duo may be looking to reclaim what they felt should have been theirs.