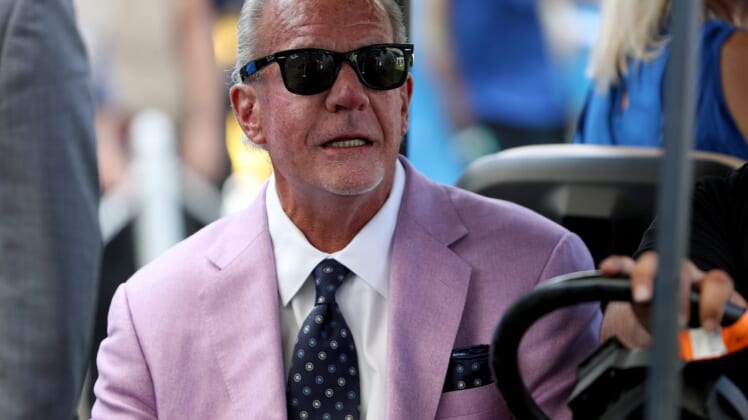 When you’re as wealthy as Indianapolis Colts owner Jim Irsay is, you can afford to buy unique items that most people could only dream of. We’ve frequently heard of his passion for owning rare rock and roll memorabilia, having an impressive collection of guitars stashed away. Now, the businessman is looking to own another prized possession, specifically an axe once used by Kurt Cobain, the former Nirvana frontman.

According to Nate Atkins of the Indianapolis Star, Irsay has his eyes on a specific guitar Cobain once played in the “Smells Like Teen Spirit” music video. It’s an item that millions of music enthusiasts would love to even someday hold, but Irsay, he wants to own it.

Details of the Kurt Cobain guitar up for auction

The historic piece of rock memorabilia up for auction is a cobalt blue Fender guitar with silver strings, complete with a white pickguard.

It’s amazing the guitar even made it through Cobain’s set, as the rock star frequently would smash his instruments at the end of his performances, clearly, the blue Fender was special.

While Cobain’s highly publicized death occurred three years after the music video was filmed, his guitar has lived on.

Here we are 28 years later and the Colts, in conjunction with Julien’s Auctions, are offering the one-of-a-kind electric guitar for sale. Part of the final bid amount will go to “Kicking the Stigma” to help raise funds aimed at addressing mental health issues.

“This guitar is big, and it relates so much to stigma. When you have a mental illness, people die. These are fatal diseases — bipolar, schizophrenia, post-partem depression, alcoholic addictions. With fatal diseases, people die and they don’t choose to die. Those of us who are alive, we’re not stronger or better. We didn’t get our act together more. We didn’t have more character. That’s where it’s so false.”

Per Atkins, Irsay himself has submitted a $2 million bid for the Cobain Fender guitar.