Indiana State proves no match for No. 7 Purdue

Jaden Ivey scored a career-high 27 points and Zach Edey recorded a career-high 22 points to go with 10 rebounds to lead No. 7 Purdue to a 92-67 victory over visiting Indiana State on Friday night in West Lafayette, Ind.

Ivey shot 10 for 13 from the field, including a pair of 3-pointers, grabbed eight rebounds and racked up four assists as the Boilermakers (2-0) continued to display their depth and versatility.

The Sycamores (1-1), who won their first game under new coach Josh Schertz, couldn’t follow it up with an upset of Purdue.

Schertz was hired this offseason after 13 years coaching Division-II Lincoln Memorial, where he led the Railsplitters to 11 seasons of 20 or more wins. 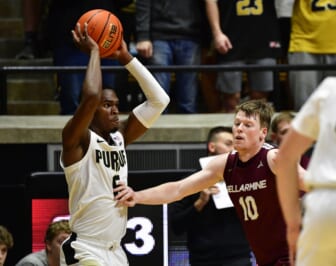 Also Read:
No. 7 Purdue Boilermakers cruise past Bellamine in opener

Edey shot a near-perfect 8 for 9 from the field and 6 for 7 from the free throw line and helped the Boilermakers establish their presence inside quickly. They pulled away from Indiana State with a 16-0 run before halftime.

Purdue outrebounded the Sycamores 42-31 and scored 42 points in the paint. Caleb Furst contributed to those efforts with 12 points and eight rebounds. Trevion Williams had 11 points, eight rebounds, four blocks and three assists off Purdue’s bench.

After trailing by as many as 30 points in the second half, Indiana State (1-1) pulled to within 19 points with just under nine minutes left before Purdue went on another hot shooting stretch to keep the game out of reach.

While both teams turned the ball over 12 times, Purdue turned those Indiana State miscues into 21 points, while the Sycamores only produced 14 points off turnovers.