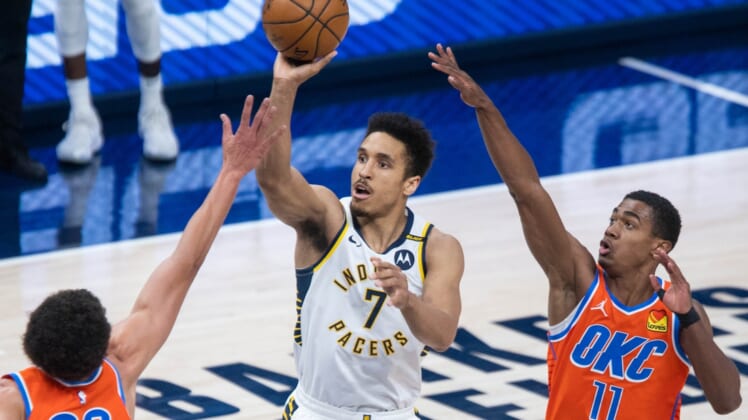 Malcolm Brogdon scored 29 points to lead the Indiana Pacers to a 122-116 win over the Oklahoma City Thunder on Wednesday in Indianapolis.

Caris LeVert added 28 points for Indiana while Oshae Brissett, making just his second career start, scored a career-high 23 points. Brissett hadn’t scored more than 13 in any of his first 25 career games over the last two seasons.

The Thunder (20-39)
cut Indiana’s lead to one early in the third with an 11-0 run that included seven points from Moses Brown.

Indiana’s lead was nine early in the fourth quarter but Oklahoma City cut into the lead once again, pulling within one before LeVert scored five quick points with a three-point play on a driving layup, then a reverse layup.

Brissett then blocked Kenrich Williams’ shot, fed it up to T.J. McConnell and then got the ball right back for a dunk at the other end.

Theo Maledon’s 3-pointer cut the Pacers’ lead to two with less than 25 seconds to play but Brogdon hit four free throws over the next two possessions — his only free throws in the game — to put the game away.

With Indiana’s size depleted, in part due to injuries to Myles Turner and Goga Bitadze, the Thunder scored 76 points in the paint.

Svi Mykhailiuk added 20 points while Brown had 12 points and 11 rebounds.

After losing the first eight games in their losing streak by an average of more than 27 points, the Thunder have been more competitive recently. Three of their last four losses have come by six points each.

Thunder forward Aleksej Pokusevski left the game just more than six minutes in with a non-COVID-related illness and did not return.

Indiana was also without forward JaKarr Sampson, who was suspended for one game earlier in the day for head-butting Spurs guard Patty Mills in Monday’s game.