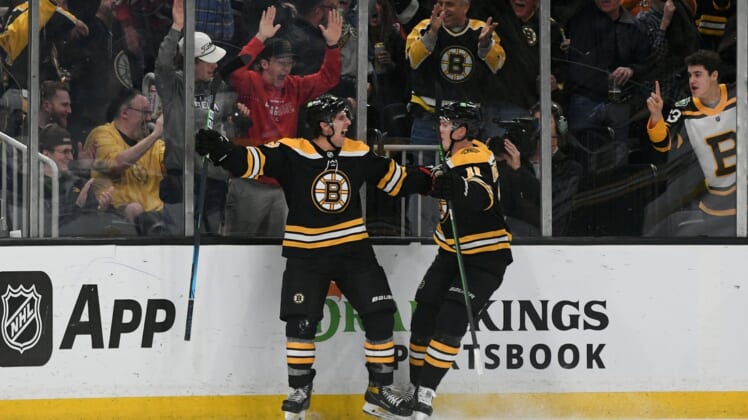 The Boston Bruins will look to close out a five-game homestand with their second straight win when the Columbus Blue Jackets visit on Saturday night.

Boston (42-20-5, 89 points) piled on eight goals — including six in the second period — and cruised to an 8-1 on Thursday win over the New Jersey Devils. The triumph moved the Bruins within one point of the Tampa Bay Lightning for third place in the Atlantic Division.

The onslaught came just two nights after the Bruins dropped a 6-4 decision to the Toronto Maple Leafs.

“We tried to build some good habits in (Tuesday’s) third period … and carry it into (Thursday). I think it did,” Bruins coach Bruce Cassidy said. “I think it helped that it looked like New Jersey was trying to be physical early on, so that’s kind of the game we probably needed to get our attention as well.”

Brad Marchand scored twice during the team’s highest-scoring regular-season period since 1983, allowing him to reach the 30-goal mark for the fifth time.

Twelve players were on the scoresheet for Boston. Patrice Bergeron (one goal, two assists), David Pastrnak (three assists), Matt Grzelcyk and Jake DeBrusk (one goal, one assist each) all had multiple points.

Marc McLaughlin became the fifth Massachusetts-born player to score in his NHL debut with the Bruins. Erik Haula and Taylor Hall also scored.

McLaughlin, who skated alongside Trent Frederic and Charlie Coyle in the absence of Craig Smith (illness), made the score 7-1 with his milestone tally.

It was a dream come true for the Billerica native and former Boston College captain.

“I feel like I’ve lived that moment a hundred million times in my basement, shooting pucks or something,” McLaughlin said.

Nick Foligno, who is slated to be honored for reaching the 1,000-game milestone prior to Saturday’s game against his former team, is day-to-day with a lower-body injury.

Newly acquired defenseman Josh Brown registered a plus-2 rating and a fight on Thursday, but his Bruins debut was cut short after leaving with an upper-body injury in the second period.

“He’s another guy that answered the bell early to calm down some of the physical stuff,” Cassidy said. “Unfortunately, we haven’t seen him play here and he wasn’t able to finish the game. It would have been good to get him some minutes.”

His status against Columbus on Friday was unclear.

The Blue Jackets (32-31-5, 69 points) are winless in five straight after being swept by the New York Islanders in a home-and-home set. Thursday’s meeting was a 5-2 loss in which the Isles scored three third-period goals.

“We didn’t match (their energy) right off the bat,” defenseman Andrew Peeke said. “Playing down 2-0 is not ideal. We found a way to come back. … In the third, a couple bounces, a couple breakdowns and next thing you know, it’s a 4-2, 5-2 game. It’s unfortunate. Didn’t play our best tonight.”

Emil Bemstrom and Justin Danforth scored second-period goals for Columbus to even up what was a 2-0 game. Defenseman Vladislav Gavrikov assisted on Danforth’s goal after scoring twice in Tuesday’s 4-3 setback.

The Blue Jackets, despite being shorthanded, “never give up,” assistant coach Pascal Vincent said. They outshot New York in Tuesday’s third period 16-3.

“They just stay in the fight and they believe they can come back in any game,” he said.