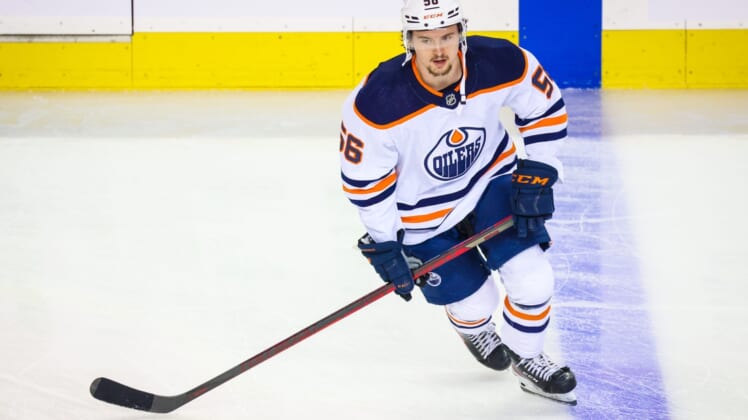 The Edmonton Oilers are riding a surge that is boosting their playoff chances.

Meanwhile, some needed consistency could do the same for the Dallas Stars.

Looking to extend their point streak to a season-high seven games Tuesday night, the visiting Oilers also aim to keep the Stars from winning back-to-back contests for the first time in more than two weeks.

Though Edmonton’s five-game winning streak ended Monday with a 3-2 overtime loss to the Colorado Avalanche in Denver, the Oilers have earned 11 points from the last 12 available, are 12-5-2 since coach Jay Woodcroft took over and sit in third place in the Pacific Division.

“When we’re on our best, we can play with anybody,” said Edmonton’s Kailer Yamamoto, who recorded his fifth goal in six games on Monday. “We take away a lot of positives (from the Colorado game).”

“We’re right there,” Woodcroft said. “We’re establishing a way that we want to play. We’re not perfect. There’s mistakes that are made. But on the whole, I think were adhering to principles in our game that I think will set us up for success down the stretch run and into the playoffs.”

Oilers stars Connor McDavid and Leon Draisaitl each recorded an assist against the Avalanche to extend their points streaks to six and five games, respectively.

Edmonton’s Mikko Koskinen could be in net on the second night of back-to-back games after Mike Smith made 28 saves at Colorado. Koskinen has 3.14 goals-against average in his past six starts but is 4-1-1 during that stretch.

The Oilers and Stars have met just once so far this season, with Dallas recording a 4-1 home win on Nov. 23. The Stars’ Roope Hintz had a goal and an assist, Jason Robertson posted one of his team-leading 30 goals and John Klingberg recorded three assists in that victory.

Hintz scored twice on Sunday during Dallas’ 3-2 road victory over the Washington Capitals — the Stars’ second win in three games after losing three in a row.

Dallas sits ninth in the West, just one point out of a playoff position, but needs to string together some victories. The Stars last won back-to-back contests during a four-game run from Feb. 27-March 6.

“The biggest thing is we have to be more consistent,” Stars general manager Jim Nill said. “We’ve got to play well, but when we play our game, we’re a tough team to play.”

Dallas netminder Jake Oettinger stopped 36 of 38 shots on Sunday after allowing at least three goals in each of his previous four starts. He made 21 saves vs. Edmonton in the November matchup.

With Braden Holtby out due to a lower-body injury, Dallas got Oettinger some help by acquiring goaltender Scott Wedgewood from the Arizona Coyotes on Sunday. About to play for his third team this season, Wedgewood is 10-14-3 with a 3.16 goals-against average for the New Jersey Devils and Arizona.

The Stars also picked up forward Vladislav Namestnikov, who recorded 13 goals with 12 assists in 60 games with the Detroit Red Wings this season.

Hintz has six points in his last eight games, but they all came in just three contests.

Draisaitl has four goals and six assists during an eight-game point streak vs. Dallas.