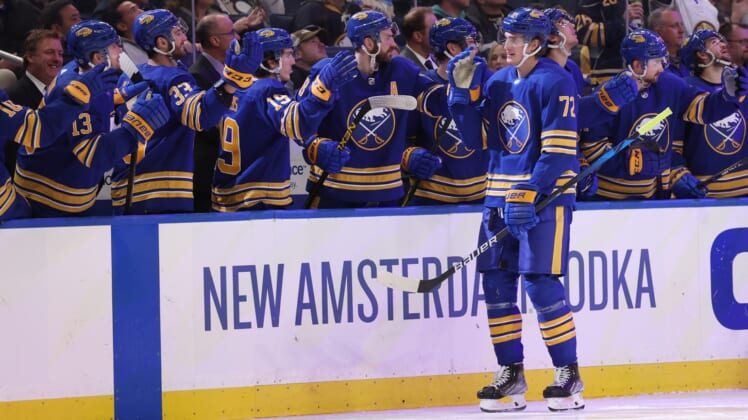 The surging Buffalo Sabres will host the Washington Capitals on Friday night, looking to keep the momentum rolling.

Buffalo has won three straight and five of six as it closes a brief two-game homestand.

“It’s been great,” Sabres forward Zemgus Girgensons said. “We’ve been playing good hockey here lately. I think it’s strictly because of the work ethic that’s been put in. Guys are not getting comfortable with one or two (good) games.”

Buffalo has won three straight for the first time since the opening three games of the season. The Sabres’ latest victory was a 4-3 shootout win against the visiting Pittsburgh Penguins on Wednesday.

Tage Thompson scored twice in his sixth multi-goal game of the season and added the deciding goal in the shootout. Thompson leads Buffalo with 27 goals, including four in his past five games.

Craig Anderson made 23 saves for Buffalo, which surrendered leads of 1-0, 2-1 and 3-2 before prevailing.

“We’re playing much better than we were earlier in the year,” coach Don Granato said. “Our execution’s been really good. There was a little bit of a period, a sequence in the second period where I thought we lost a little, there was a little swing in momentum, but it was only a couple shifts and we got right back to our game.”

The Capitals are a team that’s been more at home on the road this season. Washington is 15-13-5 at Capital One Arena and 20-7-5 in away games and have won three straight road contests.

Washington has lost its past two, both at home, including a 5-2 defeat at the hands of the St. Louis Blues on Tuesday. The game was tied 2-2 early in the second period before St. Louis scored twice and added an empty-net goal late.

“Some of those better teams, it’s hard to chase the games against teams like that,” forward Tom Wilson said. “But I thought we were in it and then they got a couple of quick ones and kind of took the wind out of our sails a little bit.”

Wilson had a goal and an assist to tie his career high in points in a season (44), and Vitek Vanecek made 33 saves for the Capitals, who are 7-2-1 in their past 10 games.

The Capitals could get a boost from the return of injured forwards Nic Dowd and T.J. Oshie.

The Capitals won the first two meetings of the season, 5-3 in Washington on Nov. 8 with Wilson scoring twice, and 3-2 in a shootout Dec. 11.