IIHF junior tournament off due to COVID-19 positives 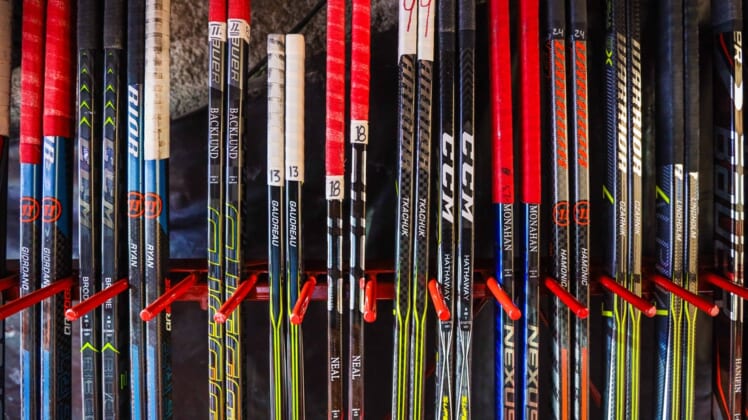 Mar 27, 2019; Calgary, Alberta, CAN; A general view of Calgary Flames hockey sticks during warm ups prior to the game against the Dallas Stars at Scotiabank Saddledome. Mandatory Credit: Sergei Belski-USA TODAY Sports

The remainder of the 2022 IIHF World Junior Championship has been officially canceled Wednesday, after players from multiple countries tested positive for COVID-19.

On Tuesday, the United States had to forfeit its game against Switzerland because of positive tests. And on Wednesday, the first two games on the schedule were forfeited by Czechia and Russia.

In a statement released Wednesday, the IIHF said in part:

“Following a recommendation by the tournament COVID-19 Medical Group and the IIHF Medical Committee, the IIHF Council has decided that, due to the ongoing spread of COVID-19 and the Omicron variant, the 2022 IIHF World Junior Championship will be canceled to ensure the health and safety of all participants.

“In addition to ensuring the health and safety of participants, the Council has determined that with another forfeiture – the third forfeited game in two days – the sportive integrity of the event has been compromised, and the event must be canceled.”

The United States was the defending champion at the 10-team tournament, being held in Edmonton and Red Deer, Alberta. Group play began Sunday and was set to run through Dec. 31, with the gold-medal game scheduled for Jan. 5

The team rosters included some of the top players in the world under age 20, including Owen Power, the No. 1 overall pick of the 2021 NHL Draft by the Buffalo Sabres. He chose to put off the NHL for a year and return to play for Michigan, partially for the chance to represent his native Canada in the junior championship.

Power scored a hat trick in his first tournament game on Tuesday, a 6-3 comeback win over Czechia.

“I’m super excited,” Power, 19, told reporters before the tournament started. “It’s a dream of mine since I was a little kid, so just having the opportunity to play for Canada at the world juniors is definitely something that’s really exciting to me and all the other guys.”