Kentavious Caldwell-Pope is a prime trade candidate for the Washington Wizards this offseason. The 29-year-old wing is entering the final season of a three-year deal and Washington has a fluid roster situation with Bradley Beal hitting the open market.

Caldwell-Pope is a sly player who always seems to fall through the cracks. He’s an efficient outside shooter who can put the ball on the floor and holds his own on the defensive end.

3. Kentavious Caldwell-Pope to the Denver Nuggets

The Nuggets are at the forefront of perennial contenders trying to win an NBA championship. With that in mind, one figures they look to make rotation tweaks this offseason. Washington offers Denver the chance to do as such.

Caldwell-Pope could be a plug-and-play starter for the Nuggets. He’ll stretch the floor playing in-between a healthy Jamal Murray and Michael Porter Jr. All the while, Caldwell-Pope can create his own shot.

Avdija, a former lottery selection, brings speed and the ability to attack off the dribble to the table. The No. 9 selection in the 2020 NBA Draft can be the Nuggets’ backup small forward. Smith is a respectable veteran guard who becomes the team’s backup point guard.

Denver can send Morris and Barton to Washington for Caldwell-Pope, Avdija and Smith. The Nuggets alter their wing rotation while the Wizards get their new point guard in Morris and a veteran scorer in Barton.

All that said, the Nuggets may prefer to stick with Morris and Barton, as opposed to making a multiplayer trade that slightly upgrades their roster.

The Pelicans are looking to build on their first-round playoff experience, an effort that would be enhanced with a healthy Zion Williamson. That effort would also be enhanced by trading for Caldwell-Pope.

New Orleans selected Dyson Daniels with the No. 8 pick in the 2022 NBA Draft, providing them with flexibility to acquire a swingman; they have Graham, Daniels, Jose Alvarado and Kira Lewis Jr. under contract for next season. Caldwell-Pope gives the Pelicans, who were one of the worst all-around offensive teams in the NBA last season, another player who can chime in offensively, specifically with his shooting ability.

A second unit of Alvarado, Caldwell-Pope, Herbert Jones, Trey Murphy III and Jaxson Hayes would make for a sturdy and versatile five-man combination on both ends of the floor. If Williamson misses time due to injury, New Orleans can insert Caldwell-Pope into the starting five, opting for more speed and scoring.

New Orleans can send Graham to Washington for Caldwell-Pope. The Pelicans fill out and balance their rotation while the Wizards get a savvy new point guard to play next to Beal (probably).

New Orleans and Caldwell-Pope are a match. There’s simply a team that would benefit from his presence a bit more.

1. Kentavious Caldwell-Pope to the Sacramento Kings

The Kings have quite possibly the most random roster in the NBA, but it’s one with compelling talent. Acquiring Caldwell-Pope rounds out head coach Mike Brown’s starting five.

De’Aaron Fox and Davion Mitchell are attacking scorers. Keegan Murray does a little bit of everything on both ends. Domantas Sabonis can score inside and outside. Richaun Holmes is an athletic big man who gets his points in the paint. Caldwell-Pope provides much-needed outside shooting for this group. 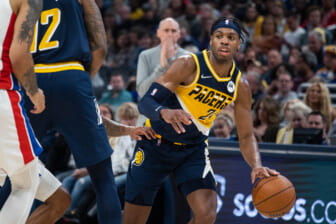 He’ll stretch the floor for Fox to play in isolation and Sabonis to operate from the inside out. Furthermore, Caldwell-Pope will be able to score in varying ways in a high-minute role.

Another option for Brown and company is having Caldwell-Pope play 25-30 minutes per game off the bench, beefing up the second unit’s scoring. One way or another, the latter represents an impactful pickup with upside for the Kings.

Sacramento can send Holiday and Len to Washington for Caldwell-Pope. The Kings get more scoring while the Wizards get a pair of rotation players in Holiday and Len.