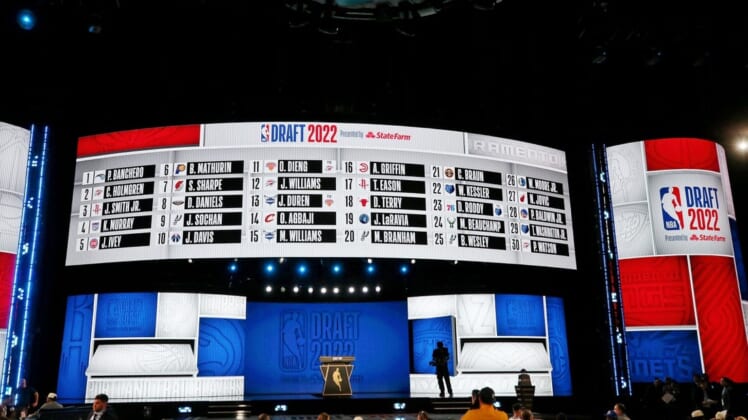 Whether it was the somewhat surprising selection of Paolo Banchero at No. 1 or one of the many trades that were made, this year’s NBA draft kept fans on their toes.

As with every draft, some teams improved themselves while others may not have found the missing piece they were seeking.

Only time will tell which teams truly prevailed on draft night, but the San Antonio Spurs, Houston Rockets and Detroit Pistons appear to be early winners, while the Sacramento Kings, New York Knicks and Portland Trail Blazers failed to put together an impressive showing.

San Antonio: The Spurs made the most of their three first-round picks, selecting Baylor forward Jeremy Sochan at No. 9, Ohio State guard Malaki Branham at No. 20 and Notre Dame guard Blake Wesley at No. 25.

Sochan is a strong defender who can defend any position. Branham has the ability to be explosive on the other side of the ball, especially from 3-point range. He shot 41.6 percent from behind the arc last season and scored in double figures in his final 11 games of the season.

Wesley has offensive skills that are bound to translate to the next level once he has time to develop, but he needs to work on becoming more consistent. Once he does that, this could very well be a great value pick for San Antonio.

Houston: Leading up to the draft, Auburn’s Jabari Smith Jr. seemed like a lock to go first overall. That all changed on draft day when Banchero went No. 1 to the Orlando Magic before the Oklahoma City Thunder took Chet Holmgren at No. 2.

Smith fell to Houston at No. 3, and chances are, the Rockets aren’t too upset with how everything panned out.

The 6-foot-10 forward averaged 16.9 points and 7.4 rebounds in his only college season. The Rockets took LSU’s Tari Eason with the 17th pick, a power forward who can help Smith fill the void left by Christian Wood.

The Pistons took him with the fifth pick, and it’s hard to ignore just how poised he looked at Purdue. Simply put, Ivey just looks comfortable playing basketball — that is, when he stays in control. He’s quick, he’s versatile and he’s everything a rebuilding team like Detroit needs.

Inserting a talent such as Ivey into a lineup that already features Cade Cunningham, Saddiq Bey and Isaiah Stewart means the future is mighty bright in Motown.

Sacramento: There’s no shame in taking Iowa forward Keegan Murray with the fourth pick, but putting Ivey in a backcourt alongside De’Aaron Fox and Davion Mitchell could have been lethal.

It’s a pick that could haunt Sacramento if Ivey winds up substantially better than Murray in the long run, but it appears to be a risk the front office was more than willing to take.

Murray, 21, does give Sacramento a more well-rounded starting five and he is obviously an outstanding player, but was he the right one? The Kings will surely learn soon enough.

New York: It seems as if the Knicks have been neglecting the draft for years in the hopes that they can land a big name in free agency. Well, it happened again on Thursday.

New York dealt the No. 11 overall pick, French big man Ousmane Dieng, to the Thunder for three future first-round picks. The Knicks did select Duke’s Trevor Keels with the 42nd pick, but that was the extent of their draft haul.

The best move New York made on draft night? Offloading Kemba Walker to the Pistons as part of a three-team deal.

Portland: The Trail Blazers might have reached a bit, taking Kentucky guard Shaedon Sharpe at No. 7 overall ahead of Dyson Daniels, Sochan and Johnny Davis.

It’s going to take some time for Sharpe to develop after he never played a game in his one season with the Wildcats. He likely won’t make an immediate impact for a team that is reeling a bit after trading CJ McCollum in February.

Portland shipped its No. 36 pick to the Pistons and took Colorado forward Jabari Walker at No. 57, capping off a pretty underwhelming draft.