Buddy Hield is among the veteran players on the now-rebuilding Indiana Pacers who should be attainable via trade this offseason. The 29-year-old wing has had his ups and downs but can still be an impactful scorer for a contending team.

Hield is a high-volume shooter. He gets up a lot of perimeter jump shots and can shoot off the dribble, as well. Furthermore, he has been able to do this at a plausible clip.

One way or another, the Knicks have to clear out rotation spots due to their wing-heavy roster construction. Swinging a trade for Hield is a way to balance out head coach Tom Thibodeau’s rotation.

RJ Barrett, an attacking scorer and inconsistent shooter, is the presumptive centerpiece of New York’s future. With that in mind, the Knicks need shooting around Barrett. Hield gives them that skill set.

Barrett can kick the ball out to Hield for an open three-pointer when he gets double-teamed off the dribble. Hield also provides an able scorer to the mix whose shooting fits well in-between Barrett and the versatile Julius Randle.

New York can send Reddish, Burks, Gibson and a future second-rounder to Indiana for Hield. The Knicks get a proven shooting scorer while the Pacers get cap relief and can experiment with Reddish — a former lottery selection. New York will also be able to provide its first-round draft pick with a legitimate rotation role.

All that said, the Knicks may prefer to trade away a wing or two with the idea of drafting such a player, as opposed to trading for another known commodity.

2. Buddy Hield to the Cleveland Cavaliers

The Cavaliers’ core is in place. Now, it’s about adding depth and complementing their foundation (Darius Garland, Jarrett Allen and Evan Mobley). Trading for Hield would be a savvy play for Cleveland.

Caris LeVert was underwhelming in his brief time with Cleveland last season, as has Okoro across his two NBA seasons. Hield gives the Cavs another starting-caliber wing and more importantly a different offensive skill set out on the wing (LeVert is a respectable scorer but an inefficient shooter while Okoro has a lacking jump shot).

The University of Oklahoma product can live out on the perimeter. He stretches the floor for Garland to play in isolation and Mobley to score in varying ways. Hield being under contract through the 2023-24 season provides Cleveland with a safety net for the possibility of LeVert bolting in free agency next summer.

Cleveland can send Okoro, Osman and Windler to Indiana for Hield and a future second-rounder. The Cavs get another scoring option while the Pacers get most notably a former No. 5 overall draft pick and the veteran Osman, who could be flipped for assets.

The factor that could stop the Cavs from acquiring Hield, though, is them preferring not to add substantial payroll beyond 2023, when they’ll have considerable cap room. 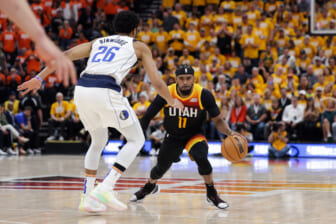 1. Buddy Hield to the Utah Jazz

Quin Snyder is gone, and the Jazz came up short in the Western Conference Playoffs yet again. It’s time for Utah to take some chances. Trading for Hield could be the start of their rotation shakeup.

Donovan Mitchell is one of the best players in the NBA. He gets his points through physicality by means of scoring off the dribble. Mitchell’s jump shot has been hot and cold. Hield’s arrival aids Mitchell in that regard. The former can help stretch the floor in halfcourt sets for Mitchell to play in isolation. 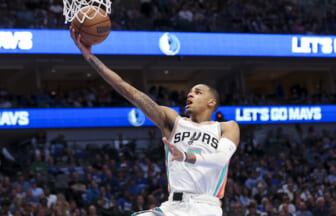 Utah has been among the league leaders in three-point attempts in recent memory. Hield’s tendency to resort to perimeter jump shots fits their recent style. It also adds another threat to score 15-20 points per contest.

Utah has a handful of players who could be traded for reasonable value. In the aftermath of acquiring Hield, the Jazz could turn their attention to acquiring a premier scorer using center Rudy Gobert. They could also move Bojan Bogdanovic, who’s entering the final season of a four-year deal.