Damian Lillard could be on his way out of the Pacific Northwest. Following their fourth first-round NBA Playoff exit in five years, the Portland Trail Blazers just finished up shop on a drama-filled coaching search with a controversial hire in Chauncey Billups.

As loyal as any player in the NBA, Lillard has always pushed back against the idea that he would want out of Portland. Following yet another disappointing season from the team, that might no longer be the case. If so, here’s a look at five ideal Damian Lillard trade scenarios.

We already know that the Knicks will be going big-game hunting during the summer after opting against pulling off a blockbuster deal ahead of the NBA trade deadline back in March. For good reason. The upstart team is slated to have roughly $60 million to spend during free agency. With some other moves, that could be enough to bring in two maximum contract players to pair up with the NBA’s Most Improved player in Julius Randle.

After finishing up shop on what was a surprising season, New York could opt to pull off the blockbuster to end all blockbusters. That would include giving up its past two lottery picks in Barrett and Toppin to entice Portland. From there, the Knicks give up the farm in the form of three future first-round selections. This type of move would still enable president Leon Rose and Co. to add another max contract player to team up with Lillard and Randle moving forward.

Former Celtics front office head Danny Ainge was always weary of giving up draft assets and young players for star power. Within his first few weeks of assuming that role, former Celtics head coach Brad Stevens has already gone against this MO. That included him giving up a 2021 first-round pick (16th overall) to the Oklahoma City Thunder to unload the contract of Kemba Walker.

It’s now possible Stevens kicks the tires on another blockbuster trade to find Jayson Tatum a true star to work with. While giving up Jaylen Brown would be hard, there’s not a single objective observer who believes Damian Lillard won’t be able to come in and form a championship-caliber tandem with Tatum. As for the Blazers, they get a still-young 24-year-old rising star who averaged nearly 25 points per game a season ago to build around moving forward. Add in Nesmith and a future first-round pick, and this could help Portland expedite a rebuild.

There has to be a point that Pelicans general manager David Griffin is going to use his wide array of draft assets to find Zion Williamson a true star to work with. What better way than to add Dame to the mix in a blockbuster trade with Portland? It would make for one of the most-dominating duos in the league and could quiet whispers of discontent coming from Williamson’s camp. 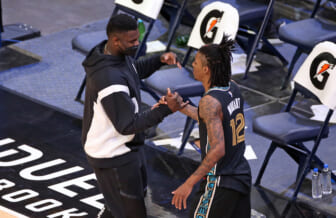 As for Portland, it mixes the hope of playoff contention short term while finding some long-term options. That includes a 23-year-old All-Star in Brandon Ingram who is a franchise cornerstone type player. Portland also nabs 2020 first-round pick Kira Lewis Jr. to replace Lillard at point guard while picking up four first-round picks — one of which would basically be fore taking on Bledsoe’s contract.

Philadelphia offered up Simmons in its pitch to the Houston Rockets for James Harden before the former NBA MVP was moved to the Brooklyn Nets. There’s absolutely no reason to believe that the 76ers wouldn’t do the same thing if Lillard were to become available. That’s especially true now that Simmons is likely on the trade block following a disastrous postseason performance. Imagine Lillard teaming up with Joel Embiid. That’d be too sexy.

Portland would then team Simmons up with C.J. McCollum to form a solid duo. The addition of talented young 2020 first-round pick Tyrese Maxey would also give the Blazers another young building block. Perhaps, Portland could even flip Maxey and one of the first-round picks acquired in this hypothetical trade for a third star. It would give the organization a ton of options. There’s also a scenario for a complete rebuild in the Pacific Northwest with Portland moving off McCollum. Remember, he’s been brought up in trade scenarios for Simmons.

Lillard is unlike other stars of this era in that he doesn’t want to join a super team. We have to give him credit for that. But the idea of returning to his Northern California roots might be seen as appealing to a dude who grew up a Warriors fan and attended many games in Oakland. For the Warriors, it’s not a secret that they are going to go big-game hunting this coming offseason and have the assets to pull off a blockbuster trade of this ilk. Adding Lillard to the mix with Stephen Curry and Klay Thompson would form one of the better trios in the NBA.

In this hypothetical Damian Lillard trade scenario, the Blazers add a vastly improve three-and-D wing in Andrew Wiggins and 2020 first-round pick James Wiseman. But neither is really the centerpiece. Rather, that comes in the form of two first-round picks in the 2021 NBA Draft (7th and 14th overall) as well as a future first-round selection. Portland also picks up a stud young guard in Jordan Poole who made major strides as a sophomore. This would be a legit package for Lillard.