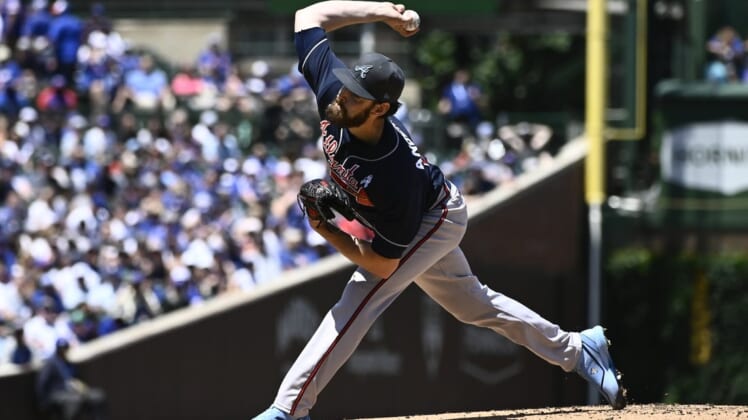 Ian Anderson threw 6 2/3 scoreless innings and the Atlanta offense broke out of its slumber as the visiting Braves defeated the Chicago Cubs 6-0 on Sunday to end their two-game losing streak.

The Braves combined for only three runs in losing the first two games of the series, but erupted early when Travis d’Arnaud hit a three-run home run in the opening inning to set the tone for the Atlanta win.

Anderson (6-3) won his third straight decision and the Braves have prevailed in each of his last five starts. He allowed three singles — two of them to Ian Happ — with two walks and six strikeouts.

It was Anderson’s first scoreless outing of the season. He improved to 2-0 in 13 2/3 scoreless innings against the Cubs in his career.

The bullpen closed the game with 2 1/3 scoreless innings — one from Jesse Chavez, 1/3 from A.J. Minter and one from Kenley Jansen.

The losing pitcher was Kyle Hendricks (2-6), who has lost three of his last six starts and has not won since May 9. The veteran pitched 4 1/3 innings and allowed six runs on eight hits, one walk and six strikeouts.

Chicago’s Adrian Sampson followed by pitching the final 4 2/3 innings and allowing no runs on one hit with five strikeouts and no walks.

The Braves scored in the first inning when d’Arnaud hit his ninth home run, a 433-foot shot over the seats in left field and onto Waveland Avenue.

Atlanta scored three more times in the fifth. Michael Harris II led off the inning with a solo homer, his third. Dansby Swanson reached second on a ground-rule double and scored on Austin Riley’s double. Riley scored when Matt Olson banged a double off the ivy in left-center field.

Olson added another double in the eighth inning, giving him three for the day and a league-leading 27 for the season.