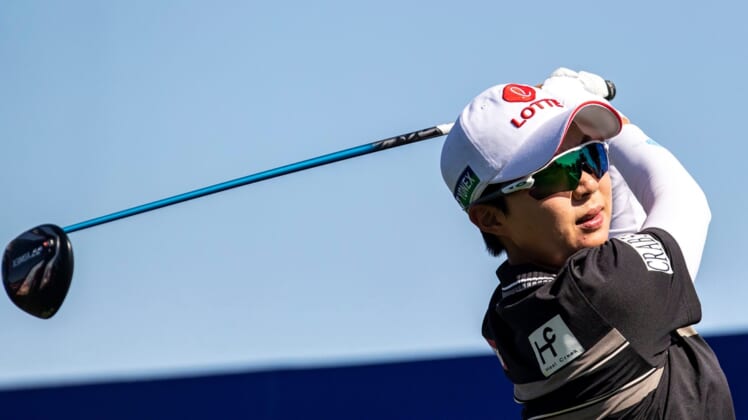 Hyo Joo Kim’s final-round 1-under-par 71 was good enough for a two-shot victory over Hinako Shibuno at the Lotte Championship in Ewa Beach, Hawaii, on Saturday.

The 26-year-old South Korean, who held three-shot leads after the second and third rounds, recovered from a bogey on No. 17 with a birdie on the final hole to finish at 11-under 277 and win for the fifth time on the LPGA Tour.

The win was worth $300,000. Her most recent victory was at the 2021 HSBC Women’s World Championship in Singapore.

Shibuno, of Japan, who was tied for second entering the day after firing a 68 on Friday, had no bogeys but only two birdies Saturday to finish at 9 under.

Shibuno said of battling Kim, “I was having very fun playing with her. My putting was a little, you know, couldn’t go in, so that was the different with her.”

Alone in third at 7 under was South Korea’s Hye-Jin Choi, who shot 69, her best round of the tournament.

The United States’ Brianna Do, who was the other player tied for second as the day began, crumbled to join six golfers tied for 12th after a 77. Her round had no birdies, and four of her five bogeys came on a five-hole span bridging the front and back nine.

South Africa’s Ashleigh Buhai shot her second consecutive 70 to end the tournament in fourth place at 6 under, one stroke better than South Korea’s Somi Lee who fell to 5 under with a 73.

Defending champion Lydia Ko of New Zealand closed out the tourney with a 1-under 70 to finish tied with seven others for 18th place.