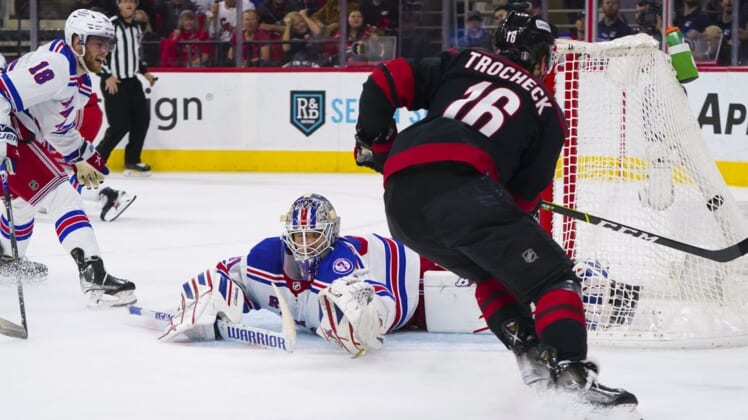 Teuvo Teravainen scored a power-play goal midway into the second period to fuel the host Carolina Hurricanes to a 3-1 victory over the New York Rangers on Thursday in Game 5 of their Eastern Conference semifinal series in Raleigh, N.C.

Andrei Svechnikov and Vincent Trocheck also scored and Antti Raanta made 16 saves for the Hurricanes, who hold a 3-2 lead in the best-of-seven series. Game 6 is Saturday in New York.

Carolina improved to 7-0 at home in the playoffs, outscoring the opposition 25-8 in games in Raleigh.

Mika Zibanejad scored a goal in his third straight game and Igor Shesterkin turned aside 31 shots for New York.

Ranger star Chris Kreider was held without a shot Thursday and has registered just one in three road games in this series. Kreider had a career-best 52 goals in the regular season and a team high-tying six in the playoffs.

New York appeared to take a 2-1 lead early in the second period after Ryan Strome’s turnaround shot from the left circle sailed between the pads of Raanta. The goal was negated, however, after Carolina successfully challenged that Rangers forward Andrew Copp was offside prior to Strome’s tally.

The Hurricanes seized a 2-1 advantage at 9:47 after rookie Seth Jarvis’ diagonal pass found Teravainen, who unleashed a one-timer deep in the left circle that passed Shesterkin. Teravainen’s goal was his fourth of the playoffs and second in as many games.

Teravainen has recorded a point in a franchise-best seven straight home games to begin the postseason.

Svechnikov fended off New York defenseman Adam Fox and sent a backhand shot between the pads of Shesterkin to double the advantage with 6:59 remaining in the third period.

Trocheck recorded his first point of the series at 12:57 of the first period after Rangers defenseman Jacob Trouba committed a turnover in the neutral zone during a New York power play. Carolina captain Jordan Staal skated in on a 2-on-1 rush before lifting a saucer pass that Trocheck converted at the right post.

New York had better results on its next power-play opportunity, as Zibanejad won an offensive zone faceoff and one-timed a pass from Artemi Panarin past Raanta. Zibanejad’s goal was his sixth of the playoffs.